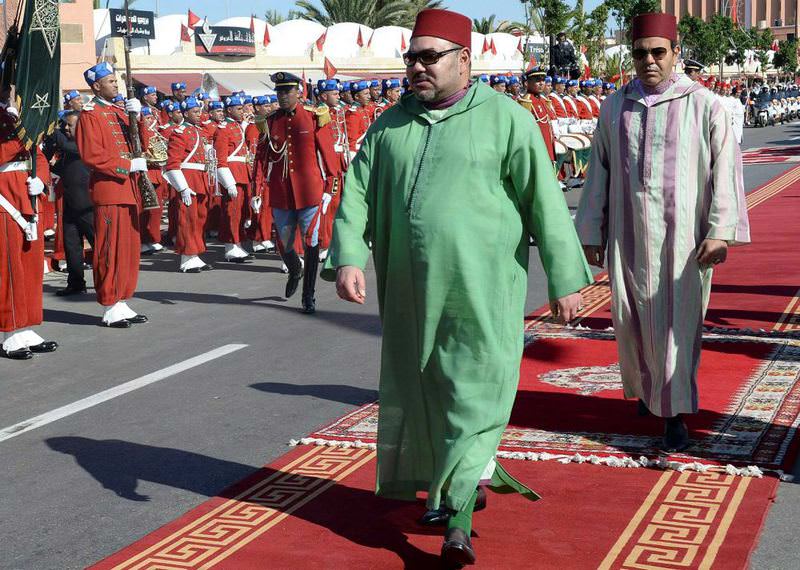 Moroccan King Mohammed VI (L) and his brother Prince Moulay Rachid arrive at a ceremony in Laayoun in the region of the Western Sahara.
by Daily Sabah with Wires
Nov 10, 2015 12:00 am

Amid economic unrest, Moroccan King Mohammad VI repeated that Western Sahara will not be given more than autonomy although several rights group accuse Rabat of violating human rights and using excessive force in the disputed area

Morocco's king said he will offer no more than autonomy for the disputed Western Sahara, a few days after United Nations chief called for "true negotiations" to end the four-decade deadlock over the region. Morocco has controlled most of Western Sahara since 1975 and claims the sparsely populated stretch of desert, which has offshore fishing, phosphate reserves and oilfield potential, as its own territory. However, the Algeria-backed Polisario Front seeks independence and a United Nations mission was formed more than 20 years ago ahead of an expected referendum on Western Sahara's political future which has never taken place. U.N. special envoy to Western Sahara Christopher Ross has intensified visits to the region and Europe recently to facilitate negotiations without preconditions and in good faith, Secretary-General Ban Ki-moon said in a statement last week. That referendum has never taken place. In April the U.N. Security Council renewed for another year the U.N. peacekeeping mission in Western Sahara but failed to accept African Union recommendations for changes to the force's mandate to give it the task of monitoring human rights.

"This initiative is the maximum Morocco can offer," Morocco's King Mohamed said, referring to the autonomy plan for the region. "Its implementation depends on reaching a final political agreement under the backing of the United Nations." The king was speaking late on Friday in a televised speech commemorating the 40th anniversary of the Green March day, when thousands of Moroccans marched on Western Sahara. "Morocco refuses any adventure with an uncertain result and that could be potentially dangerous," he said.

The Western Sahara dispute returned to the headlines last month when Morocco said it was considering a boycott of Swedish companies operating in the North African kingdom because of Sweden's position on the conflict. The government said Sweden has been campaigning to boycott products from Western Sahara and international companies with a presence there. "Whoever wants to boycott Moroccan products is free to do so, but they should assume the consequences of their decisions," the king said. Sweden and other Scandinavian countries have backed Western Saharan self-determination, while France and Spain have been accused by activists and human rights organizations of supporting the Moroccan line.

Polisario's planned Sahrawi Republic (SADR) was recognized by some countries, mainly from the African Union, but none of the Western powers recognized it. Morocco said it will revive the region through investment, including a new roads program and an international airport serving the rest of Africa. It has called for Moroccan and foreign investors to seize opportunities there. While rights groups such as Amnesty International accuse Morocco of continuing to use excessive force against activists and repressing political freedom in Western Sahara, Rabat invests heavily there, hoping to calm social unrest and dissuade independence claims.

Although the Moroccan King claims that investments will be boosted in the disputed region, Morocco's economy is in trouble since exports to Europe decline due to the weak European recovery, the International Monetary Fund (IMF) said in a report on Thursday. While growth is recovering and should reach 4.7 percent in 2015, due in part to a good agricultural season, non-agricultural activity remains sluggish, because the European recovery is slower than expected, the report said. Growth is up from 2.7 percent in 2014, according to IMF statistics. Low growth last year was due to low commodities prices which hurt the agricultural sector. "Growth is expected to slow to 3 percent in 2016, as agricultural activity returns to normal, and should strengthen gradually in the medium term to close to 5 percent. However, risks from lower growth in advanced and emerging countries, an increase in world energy prices resulting from geopolitical tensions in the region, and a surge in global financial market volatility remain substantial," the report warned. Mining, and industries like aerospace, automobile and electronics manufacturing are making an increasing contribution to Gross Domestic Product, the report said.

The people of Morocco suffer from the weak economy as hundreds of people staged protests against the government in the last weeks. Hundreds of demonstrators took to the streets in the northern Moroccan city of Tangier on Saturday to protest over high prices for water and electricity, despite government assurances and calls to end the rallies. Large-scale protests are rare in Morocco, where the king still holds sway. When pro-democracy unrest toppled leaders in Tunisia, Egypt and Libya in 2011, the palace calmed similar protests with limited reforms, spending and tougher security. Saturday night's protest was the latest in a series of rallies that started three weeks ago. It took place days after authorities said the government was working with the French-owned company running the services to review the bills and called the city's population to stop protesting. "Shame, shame, they sold us out to colonialism," chanted the protesters as they marched through downtown Tangier.