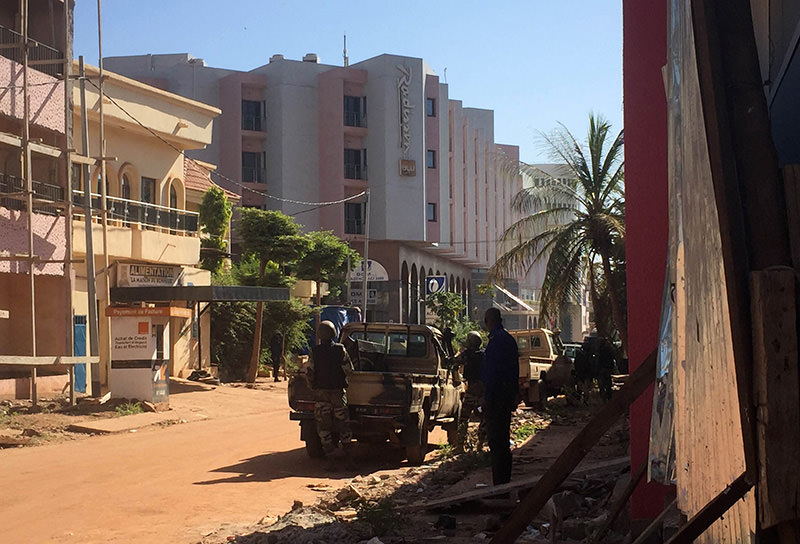 "There are no more hostages with [the attackers]," Internal Security Minister Salif Traore said, adding that the hostage-takers remained holed up at the hotel.

A U.N.official, speaking on condition of anonymity because the operation is still ongoing, said 12 bodies were found in the basement and 15 bodies were found on the second floor. The official stressed that the building had yet to be totally cleared.

Another U.N. official, U.N. Mali mission spokesman Olivier Salgado, said two extremists have been killed and that forces are going from room to room, checking for more casualties.

An African group affiliated with al-Qaeda claimed responsibility on Friday for the attack.

Al-Mourabitoun, a group based in northern Mali and made up mostly of Tuaregs and Arabs, posted a message on Twitter saying it was behind the attack on the hotel.

The claim could not immediately be verified.

Turkish Airlines says all of the seven crew members who had been taken hostage were freed from the hotel.

A plane departed from Istanbul to bring back the seven Turkish Airlines staff back to Turkey.

Five crew members (out of the total seven) including a station chief, two pilots and two flight attendants were released earlier Friday.

A government official said it was not clear if they were released by the assailants or freed by the authorities. The official said he was not able to confirm reports that the hostages were asked to read from the Quran during the ordeal.

Air France in its statement said that 12 of its crew members, including two pilots who were trapped at the hotel, were now safe. "As a precaution, Air France flights to and from Bamako this Friday Nov. 20 have been cancelled," the airline added.

Chinese diplomatic sources in Mali also told Anadolu Agency that at least seven Chinese nationals were among the hostages.

Some hostages were reportedly set free after gunmen asked them to recite verses from the Quran, a local security source told Anadolu Agency.
Commander Modibo Traore Naman, spokesman of the General Directorate of State Security in Mali, told Mali's national radio that at least 10 heavily-armed men had attacked the hotel.

Eyewitnesses told Anadolu Agency that the assailants included at least eight armed men and two women armed with Kalashnikovs and grenades. The assailants have reportedly entrenched themselves on the seventh floor of the hotel.

Malian Defense Ministry increased the death toll to five people, including three hostages and two security forces. The siege of the hotel, which is popular with foreigners and UN staff, began at around 8.30 a.m. local time (0830GMT), local security sources said.

Malian forces were trying to secure the hotel floor by floor and have rescued dozens of people from the hotel's ground and second floor, Anadolu Agency's correspondent at the hotel said.

Assailants also injured at least five people, including a police officer, who was shot in the leg, the correspondent added.

French President Francois Hollande also issued a statement. "I want to assure all Malians of our solidarity and support for them and I urge all French nationals who are in the affected area to be vigilant at this time," Hollande said.

Also, the UN force deployed in Mali, MINUSMA, said in a statement that they too will support the Malian authorities and provide reinforcements to deal with the siege.

Malian President Ibrahim Boubacar Keita also announced that he will be cutting short his visit in the Chad capital N'Djamena, where he was attending the summit of the Sahel G5 and was on his way back to Bamako.

Earlier, the Rezidor Hotel Group, operator of the Radisson Blu Hotel, said in a statement: "Two persons have locked in 140 guests and 30 employees. Our safety and security teams and our corporate team are in constant contact with local authorities".

According to eye-witnesses, hostage takers arrived at the hotel in a stolen car with diplomatic number plates. The gunmen opened fire immediately, killing the guards and injuring several other people.

Automatic gunfire and at least one explosion were heard coming from the 190-room Radisson Blu hotel in the city's northwestern Hamdallaye neighborhood.

"The security forces are trying to dislodge [the attackers] and an exchange of fire can still be heard," a security official told Anadolu Agency on condition of anonymity.

Gunfire could be heard reverberating around the district since morning as security forces established a cordon.