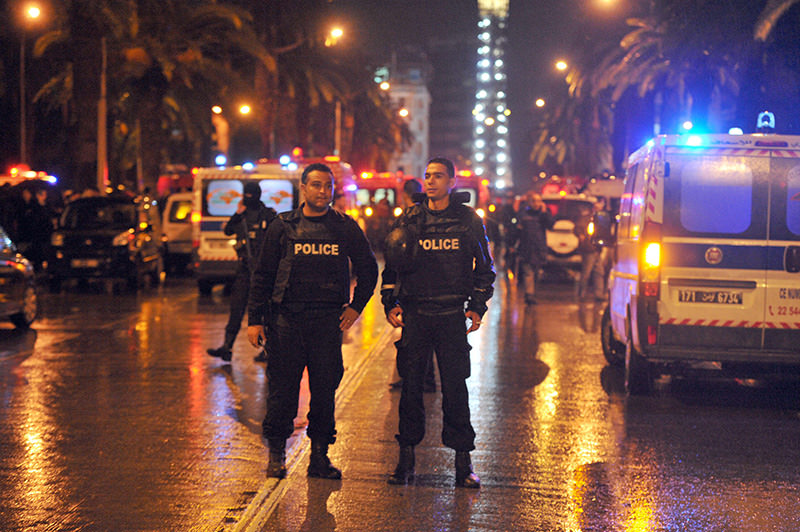 by Associated Press Nov 24, 2015 12:00 am
An explosion struck a bus carrying members of Tunisia's presidential guard in the country's capital Tuesday, killing at least 12 people and wounding more than a dozen others in what the Interior Ministry called a "terrorist act."

President Beji Caid Essebsi declared state of emergency and curfew after attack on his presidential guard.

The blast on a tree-lined avenue in the heart of Tunis is a new blow to a country that has struggled against extremist violence. Radical gunmen staged two attacks earlier this year that killed 60 people, devastated the tourism industry and rattled this young democracy.

Police fanned out throughout central Tunis after Tuesday's explosion, and ambulances rushed to the scene, evacuating wounded and dead. Prime Minister Habib Essid and Interior Minister Najem Gharsalli visited the scene of the attack after it was cordoned off by police.

Interior Ministry spokesman Walid Louguini told The Associated Press that at least 12 were killed and 16 wounded in what the government considers a "terrorist act."

Essebsi wasn't in the bus at the time. His presidential guard is an elite security force that protects only the president.

Witness Bassem Trifi, a human rights lawyer, said the explosion hit the driver's side of the bus, describing a "catastrophic spectacle."

"I saw at least five corpses on the ground," he told the AP. "This was not an ordinary explosion."

The attack came days after authorities visibly but inexplicably increased the security level in the capital and deployed security forces in unusually high numbers. The French Embassy is this former French territory was also put under high protection in recent days, after extremist attacks in Paris killed 130.

Earlier this month, Tunisian authorities announced the dismantling of a cell that it said had planned attacks at police stations and hotels in the seaside city of Sousse, about 150 kilometers (95 miles) southeast of Tunis. Sousse was one of the targets of attacks earlier this year.

Kerry said the U.S. and Tunisia would soon begin negotiations on a major loan guarantee and were discussing expanded military cooperation, including intelligence sharing and the possible use of drones to collect information about potential threats. A U.S. military team was expected in Tunisia around late November to begin those talks.

Tunisia is the only Arab Spring country to have solidified a new democracy, but it is facing serious economic and security challenges.