Waiting for someone to save or kill you: A Burkina Faso attack survivor tells it all 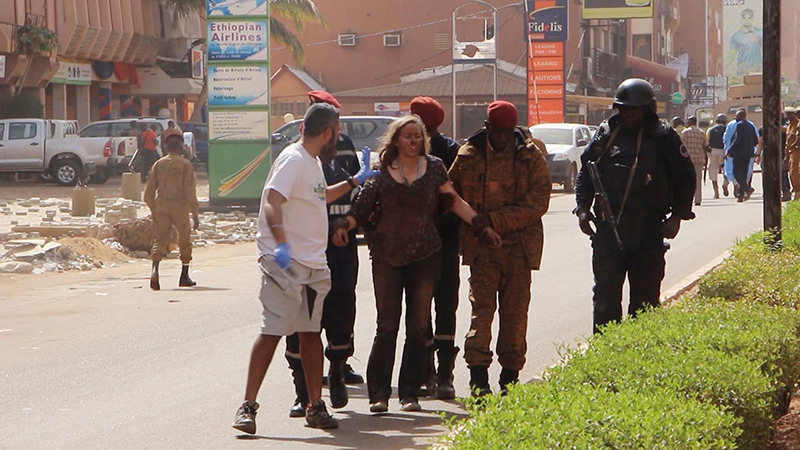 About 150 hostages were freed, Burkinabe officials said Jan 15, 2016. (AP Photo)
by reuters Jan 16, 2016 12:00 am
Al Qaeda fighters singled out white people during an attack in Burkina Faso's capital Ouagadougou, returning repeatedly to a restaurant popular with foreigners to execute the wounded lying amid overturned tables and chairs, a survivor said on Saturday.

Security forces backed by French and U.S. military personnel retook the luxury Splendid Hotel and secured surrounding buildings during an hours-long operation in which four suspected extremists were killed.

While some 150 hostages were freed, around two dozen people from 18 different countries died.

"It felt like something had exploded in the restaurant," said a Slovenian woman who was in the Cappuccino restaurant, opposite the Splendid.

"At first I thought it was a firecracker or a fuse. But then it continued and I realised that, okay, they are shooting at us," the social anthropologist, who did not want her name to be used, told Reuters in neighbouring Ivory Coast by phone.

Two men, one tall and bearded, the other young and short, then burst into the restaurant, packed with a mix of local Burkinabe and white foreign diners enjoying a Friday night out.

"They were dressed all in black, and their faces were showing. They weren't hiding their faces. They had Kalashnikovs ... and they also went and shot people with a handgun."

The woman dashed for a hiding place as the gunmen started singling out white customers. She managed to squeeze between the wall and a bench and lay there for two hours.

"I wasn't sure if my feet were showing. That was my biggest fear. I thought they might see my white feet and come and shoot me," said the woman, who has been visiting Burkina Faso for two decades.

From her hiding place, the woman saw little but could hear the attackers' movements.

"We heard shots, grenades, detonations. It was echoing and extremely loud ... They kept coming back and forth into Cappuccino. So you'd think 'It's over', then they'd come back and shoot more people."

"They would come back and see if the white people were moving and then they would shoot them again," she said. "My friend had a dead white person on top of her, bleeding onto her. But his body saved her."

Soon the power went out, plunging the restaurant into darkness as customers who had not been killed lay motionless, feigning death.

"There was a child ... I could hear the child speaking to the mother for a while and the mother answering. She kept telling him to keep quiet," the woman said.

As the room started to fill with smoke, the mother started gasping for air before eventually falling silent. It is not known whether she or her child survived.

With the smoke thickening, the Slovenian in her hiding place was faced with a stark choice.

"I thought I would die from asphyxiation because there was smoke and fire. So my gut feeling was that I take the risk now to go out and get shot or I die from choking on the fire or burning. I heard the crackling sound of fire," the survivor said.

"It was so dark ... I bumped into tables and there was glass on the floor ... I didn't even dare look if there were bodies. And when I got out, there were people hiding under cars as they were slowly trying to get away."

The woman made her way to a compound next to the restaurant where other survivors had gathered. It was another hour before soldiers arrived to escort them to safety.

"I kept looking at my watch, but it didn't seem to make any sense, because it was so slow. It felt so long, because every minute you're waiting for someone to come and help you and save you - or kill you."
Last Update: Jan 16, 2016 7:37 pm
RELATED TOPICS