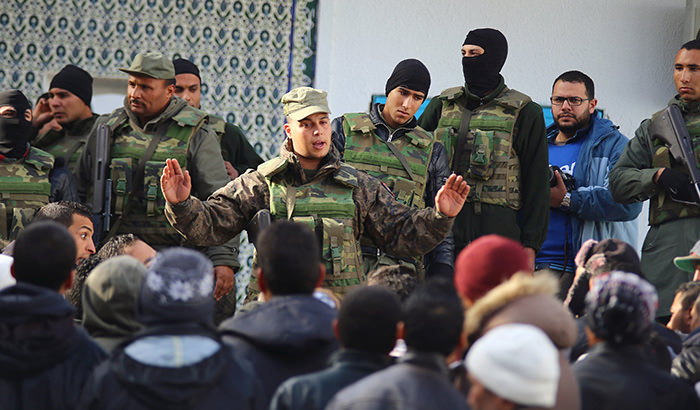 An army soldier tries to disperse protesters as he stands guard with his comrades outside the local government office during a protest in Kasserine, Tunisia January 22, 2016 (Reuters Photo)
by Compiled from Wire Services
Jan 22, 2016 12:00 am

Protests over unemployment are shaking Tunis and spreading to other parts of the country. Authorities declared a nighttime curfew across the country to calm the most serious outbreak of social unrest since the 2011 revolution

Tunisia imposed a nationwide overnight curfew Friday in response to growing unrest over unemployment as protests across the country descended into vandalism in several cities.

The curfew from 8 p.m. until 5 a.m. began Friday because the attacks on public and private property "represent a danger to the country and its citizens," the Interior Ministry said. The previous night, police stations came under attack and security officers used tear gas to repel protesters armed with stones and Molotov cocktails. In housing projects on the outskirts of the capital, Tunis, roving groups of young people pillaged a bank and looted stores and warehouses.

Tunisia's prime minister, Habib Essid, cut short a visit to France to deal with the protests, which were triggered Sunday when a young man who lost out on a government job climbed a transmission tower in protest and was electrocuted. Tunisia's unemployment stands around 15 percent, but is 30 percent among young people. "Are we not Tunisians too? It's been four years I've been struggling. We're not asking for much, but we're fighting for our youth. We struggled so much for them," said Leila Omri, the mother of an unemployed graduate in Kasserine.

Tunisia has been under a state of emergency since a suicide bombing in November killed 12 members of the presidential guard in the heart of Tunis an attack that capped an unusually violent year for Tunisia. That bombing, as well as attacks earlier in the year against the Bardo museum and the tourist beach town of Sousse, were claimed by DAESH.

The suicide five years ago of another unemployed youth set off a popular uprising that overthrew Tunisia's longtime ruler Zine El Abidine Ben Ali, and eventually gave rise to the "Arab Spring" uprisings across North Africa.

In an interview in Paris just before his government imposed the curfew, Essid denied the context of the two deaths was comparable. "Tunisia has completely changed from a dictatorship to a young democracy. You know during youth there are periods of adolescence that you have to get through," he told France 24 television. "We have a difficult job and we are aware of the difficulty."

Tourism, a main driver of Tunisia's economy, plummeted after the attacks, leaving even the relatively prosperous coastal areas struggling.

In recent days security forces have used tear gas and water cannon against crowds of hundreds of demonstrators, some of whom burned tires and threw stones. The unrest has spread to other parts of the country - including the capital where authorities reported "sacking and pillaging" in one suburb - prompting them to declare a nationwide nighttime curfew.

In the town of Feriana, a policeman died Wednesday during an operation to disperse protesters, the interior ministry said, apparently when his vehicle overturned although the circumstances were unclear.

Yahyaoui wants his son, a graduate in electro-mechanics, to be recognized by the authorities as a "martyr," like the 338 victims of a bloody crackdown on the uprising that led to the overthrow of Ben Ali. "If I don't get the recognition of my son's rights, I am ready to sacrifice other members of my family," said the father of six other boys and two girls.

Since Saturday, Yahyaoui has joined hundreds of others protesting each day in front of the heavily guarded government headquarters in Kasserine, a town of more than 80,000 near the border with Algeria. "The social situation is very difficult," said the unemployed 36-year-old. He warned the authorities were driving youths "to the drug trade and terrorism," alluding to the thousands of Tunisians who have joined extremist groups in Syria, Iraq and neighboring Libya. Such sentiment is widely shared among the youth of Kasserine, where poverty stalks the poorly maintained streets, crowded neighborhoods and decrepit housing.
Last Update: Jan 22, 2016 4:16 pm