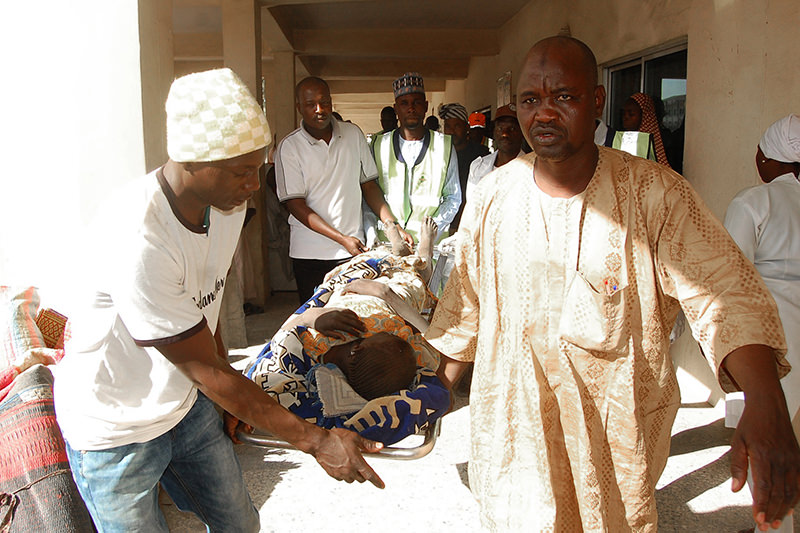 Rescue workers transport a victim of a suicide bomb attack at a refugee for treatment at a hospital, in Nigeria, Feb. 10, 2016. (AP Photo)
by Feb 10, 2016 12:00 am
Two female suicide bombers killed more than 60 people at a camp for people displaced by an insurgency of the militant Boko Haram group in the northeast Nigerian town of Dikwa, military and emergency officials said on Wednesday.

The attack occurred 85 km (50 miles) outside the capital of Borno state, centre of the seven-year insurgency, they said. It took place on Tuesday, but a breakdown in the telephone system prevented the incident being made public earlier.

The two female suicide bombers sneaked into an internally displaced persons (IDP) camp and detonated themselves in the middle of it, emergency officials and the military source said.

The chairman of the State Emergency Management Agency, Satomi Ahmad, added that 78 people were injured.

No group claimed responsibility but the attack bore the hallmarks of Boko Haram, which has frequently used female bombers and even children to hit targets.

The militant group has recently increased the frequency and deadliness of attacks with three at the end of January. At least 65 people were killed outside Borno state capital Maiduguri on Jan. 31.

Since it lost territory to a government counter-offensive last year, Boko Haram has reverted to hit-and-run attacks on villages and suicide bombings at places of worship or markets.

Boko Haram has only rarely targeted camps housing people displaced by the conflict and Tuesday's attack was the first one to kill victims in Borno state.

The military said militants made one abortive attempt on a camp on the outskirts of Maiduguri on Jan. 31. Boko Haram hit a Nigerian IDP camp for the first time last September, in the Adamawa state capital of Yola.