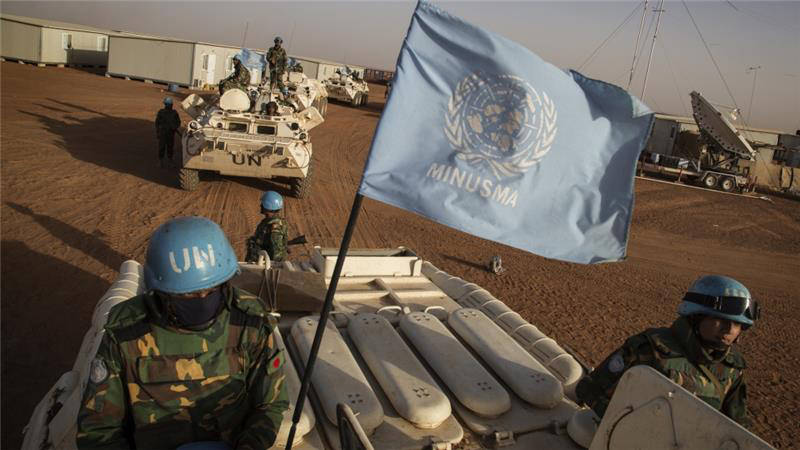 Friday's attack was the latest against UN peacekeepers in Mali's northeast. (AP Photo)
by Feb 12, 2016 12:00 am
Five U.N. peacekeepers were killed when their base in northern Mali was hit by mortars, gunfire and a truck bomb on Friday, an attack that a local separatist group blamed on extremists.

At least 30 people were wounded in the attack in Kidal, a town in an unstable desert region that is home to extremist groups including al Qaeda in the Islamic Maghreb which have staged increasingly bold raids in recent months and have targeted the U.N. base several times.

"At about 7 a.m. (2 a.m. ET) the MINUSMA base in Kidal was the target of a complex attack," said Mahamat Saleh Annadif, the Mali representative of the U.N. secretary general, referring to the peacekeeping mission.

Eight mortar shells were fired at the base and there was also gunfire, said MINUSMA spokesman Olivier Salgado.

Guinea said three of its peacekeepers were among the dead. The nationality of the other dead and wounded was not immediately known.

The Kidal base is part of an attempt by the United Nations to end violence in Mali following a takeover of the north by militants in 2012, which was thwarted by a French-led intervention force that pushed the militants out of key towns a year later.

Militants have expanded their attacks in recent months into other parts of Mali and beyond. These have included an attack on a hotel in Mali's capital in November in which 20 people died, and one on Burkina Faso's capital in January in which 30 were killed.

There is also a decades-long separatist struggle in northern Mali by ethnic Tuaregs. Radouane Ag Mohamed Aly, spokesman for the separatist Coordination of Azawad Movements (CMA), told Reuters that the Kidal attack had been conducted by extremists.

There was no official confirmation or claim of responsibility.

During a visit to Mali's capital Bamako on Friday, German President Joachim Gauck said more of the country's soldiers were due to arrive as peacekeepers to boost a contingent of 650 the government approved in January.

In a separate incident on Friday, three Malian soldiers were killed and three wounded when their military convoy was ambushed on a road between Timbuktu and Goundam in northern Mali, a military source said.

The wounded were evacuated to Timbuktu hospital. It was not clear who had conducted the ambush.