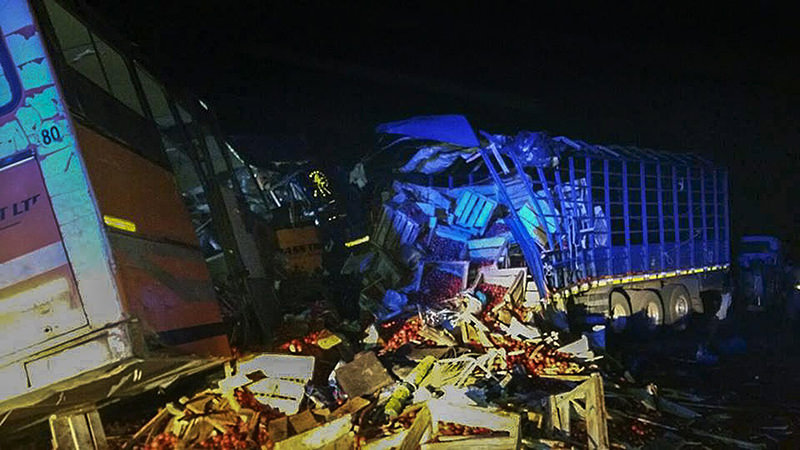 The scene of an accident between a bus and a tomato truck in Kintampo, Ghana 17 February 2016 (EPA Photo)
by Feb 19, 2016 12:00 am
Sixty-one people died and 25 were critically injured when a passenger bus collided head-on with a truck carrying tomatoes on a highway in Ghana, police said on Thursday.

It is one of the country's deadliest ever road disasters.

"The latest and the final report is that 61 dead and then 25 are in critical condition," regional police spokesman Christopher Tawiah told journalists.

"It was very serious. Many of them were already dead," Tawiah said, describing the grisly crash scene where police and firemen were forced to cut through the wreckage to pull out survivors.

"We had to use chainsaws to cut through parts of the mangled bus to get bodies and survivors out," he said.

Those injured have been taken to four different hospitals for attention, Tawiah said.

Initial investigations suggested the accident on Wednesday evening was caused by speeding by the bus, he said.

The bus was reduced to a twisted mess of metal and the road covered in a carpet of crushed red tomatoes after the crash between the truck and the government-operated bus, which had been heading to the northern town of Tamale.

A witness said the bus was overtaking a vehicle at a sharp bend and collided with the truck, the police officer said.

Ghana President John Mahama said the accident was "very sad news" and sent "condolences to those who've lost loved ones" in a series of remarks posted on Twitter.
Last Update: Feb 19, 2016 10:53 am
RELATED TOPICS