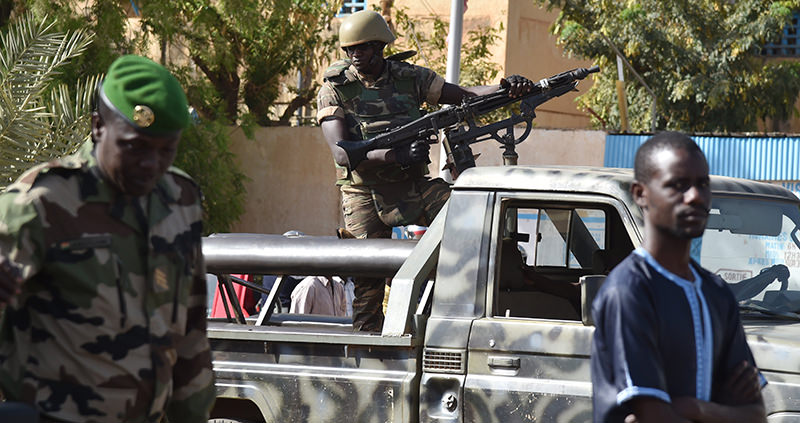 Soldiers stand guard in Niamey on March 19, 2016, during the funeral ceremony of an army commander killed by Boko Haram in the Diffa region, near the border with Nigeria. (AFP Photo)
by Anadolu Agency Mar 25, 2016 12:00 am
At least 829 Boko Haram captives have been freed in the northeastern Borno state as Nigerian troops intensified "clearance operations" across the region once occupied by militants.

Army spokesman Sani Usman said late Thursday that 22 militants were killed Tuesday night in an operation in the Kala Balge area of Borno while 309 persons held captives by the militants were freed.

"In a related development, troops of 3 Battalion with the support of the civilian joint task force also conducted a fighting patrol at Kusumma village, in which they killed three Boko Haram terrorists and captured one alive," said the army spokesman.

"They also rescued 520 persons held hostage by the terrorists and recovered one motorcycle, weapons and axes," he added.

Nigeria has been battling the Boko Haram insurgency in its northeastern region since 2009. So far, over 2 million internally displaced persons have been recorded while tens of thousands - mostly civilians- have lost their lives.

Nigeria has declared a technical victory over the militants whose operational capacities to seize territories have been degraded. But the militants still carry out occasional deadly suicide bombings on soft targets in the region.

On Thursday, Boko Haram leader Abubakar Shekau purportedly released a video in which he predicted his own end and called on fighters to consider an introspection. Many analysts have dismissed the video as fake, citing several of the video's features not being consistent with the group's conduct since it pledged allegiance to Daesh.

Nigeria's defense headquarters urged citizens to see the video of a purportedly somber Shekau as a ploy to trick people into letting down their guards and then wreak a greater havoc.
Last Update: Mar 28, 2016 2:51 pm
RELATED TOPICS