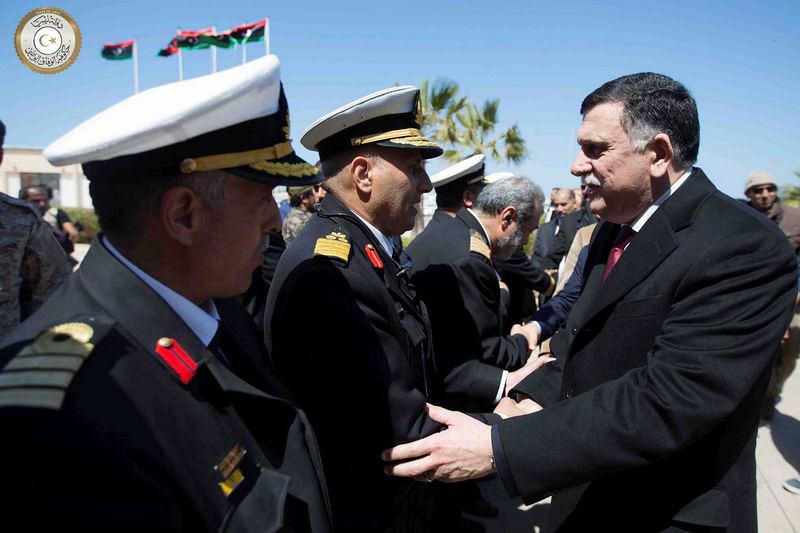 After months of efforts to establish a unity government under the mediation of the U.N., its head, Fayez Serraj, arrived in Libya amid fears of renewed clashes since many prominent figures oppose the unity government

The head of a U.N.-brokered Libyan unity government arrived in the capital by sea Wednesday to set up a temporary seat of power in a naval base despite threats from competing factions, which prevented him from arriving by air. Western nations view the unity government as the best hope for ending Libya's chaos and uniting all factions against an increasingly powerful DAESH affiliate, which has seized the central city of Sirte. But factions within two other rival Libyan governments, one of which is based in Tripoli, are opposed to the U.N.-backed body.

Fayez Serraj sailed in from neighboring Tunisia aboard a Libyan vessel, according to the unity government's website, which denied reports that the officials had been brought in aboard an Italian ship. His arrival sparked fears of renewed clashes in Tripoli, which is controlled by several militias with different loyalties. Hours after he landed, shops and restaurants closed, and cars lined up outside petrol stations. Opposing militias set up checkpoints in downtown Tripoli, stopping cars and searching drivers. Late on Wednesday, witnesses said armed men attacked the offices of al-Nabaa TV network and took it off the air. Serraj arrived with six deputies who are members of the Presidential Council, which was established based on a U.N.-mediated deal signed by breakaway groups from the two governments last year. The council formed the new unity government headed by Serraj.

The officials were prevented from flying into Tripoli by a rival government based in the capital. A third government is based in the east of the vast oil-rich country. Libya has been dominated by an array of militias since the 2011 uprising that toppled and killed longtime dictator Moammar Gadhafi. "It is time for all of us as Libyans to work together for the sake of Libya," Serraj said upon his arrival, according to the government's Facebook page. He urged rivals to "turn the page of the past," saying "revenge, alienation, antipathy, and hatred don't build a state." Serraj stressed that all laws will be compliant with Shariah. He also vowed to unify state institutions and implement "rapid measures" to lessen the suffering of civilians. Pictures on the website showed him shaking hands with naval officers, who presented him with a golden plate.

But Ali Abu Zakouk, the foreign minister of the rival government, said Serraj's presence is "unacceptable." Last week, the Tripoli government declared a state of emergency and ordered its forces to "increase security patrols and checkpoints." Days later, the government closed Tripoli's air space. On Tuesday, Khalifa Ghweil, the prime minister, said the U.N. was "deepening the schism" and that its political deal had produced "a deformed newborn." He added in a televised speech that the government had to close the air space after members of the U.N.-backed government tried to fly in on a passenger plane from Tunisia, accusing them of using the other passengers as 'human shields.'

More immediately, he is at risk of being attacked or besieged in his base by rival militias. He is being guarded by battle-hardened militias from the city of Misrata, which saw fierce fighting during the uprising five years ago. But Tripoli is also home to several powerful militant groups, which could move against him, setting off yet another round of fighting. Tripoli's various militias appeared to be weighing their next moves, with many leaning toward support for Serraj. The spokesman of the Special Deterrent Force, a powerful unit that answers to Tripoli's Interior Ministry, said it would support Serraj. "We want one man to unite the country. We hope that this man is Serraj," Ahmed ben Salem said. But he said around 20 percent of the militias are opposed to the new government. Among them is Salah Badi, part of the Libya Dawn coalition which backed Tripoli's parliament against forces allied with the internationally-backed government in 2014. Fighting that year saw the Tripoli government secures the capital while the internationally-backed government relocated to the country's far east.

The central government, in a state of continued turmoil, has long been at the mercy of militias that hope to integrate and build a national army against the interim government. After Moammar Gadhafi's ouster, the army has disintegrated, and the central government has gradually lost its power without having much effect on the ongoing violent clashes among governments and militias that serve as part of Libya's regular army in the eastern city of Benghazi. As many militant groups have taken up arms against the fragile central government, the government has decided to hold an early election in June to replace the interim government through democratic methods. However, the problem is that there are no-well established political groups to play a role in holding democratic elections amid the rising unrest.
RELATED TOPICS