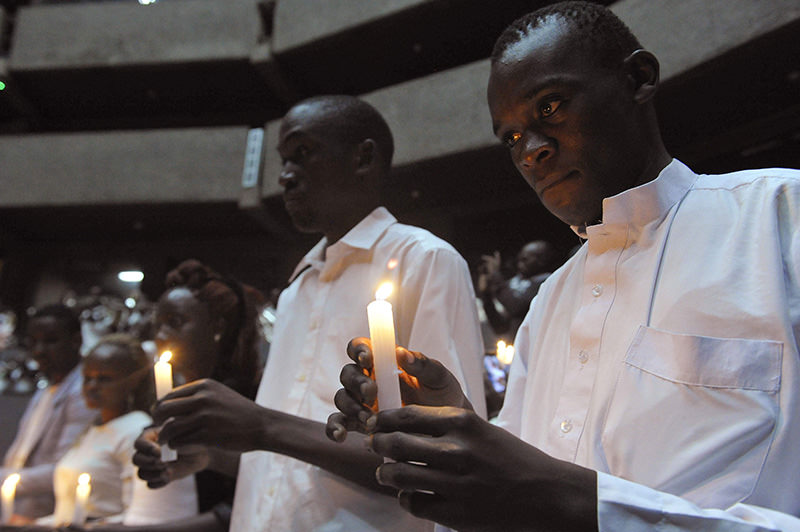 Former students of Garissa Univesity College hold candle on the memorial for the victims of last year's terrorist attack (AFP Photo)
by Associated Press
Apr 02, 2016 12:00 am
Kenyans on Saturday marked the first anniversary of the Garissa University attack, when four extremist gunmen massacred 148 people, with renewed criticism of the government's handling of the crisis.

Hundreds gathered at the site of the attack in eastern Kenya to remember the incident, one of the country's worst-ever terrorist attacks carried out by gunmen from the al-Qaida-allied Somali al-Shabab group.

The gunmen were finally killed by a police commando unit after 12 hours. The government has been heavily criticized for its slow response to the attack, despite there being a military base nearby.

Kenya has suffered a wave of extremist attacks since it deployed troops in October 2011 to Somalia to support the weak government there in its battle against the al-Shabab militants.

The university reopened in January after extensive refurbishment of the bullet-scarred buildings but only 150 of its 700 students have returned to class. Others were transferred to Moi University in western Kenya.

Aden Duale, the leader of the parliamentary majority, said at the event that Kenyan troops will remain in Somalia until their mission of pacifying the country is fulfilled.

Other speakers, however, reserved their ire for the government, saying that the families of the victims should receive compensation.

"That is the duty of the government," said Garissa County women's representative, Shukran Gure.

Paul Wekesa, 24, a second-year education student who witnessed the attack, agreed that the government should offer some kind of compensation to families of the students who died and scholarships for those survived.

He said he survived only because he had been up early to study and so was awake when the attack began. Together with another group of students he went to investigate the sounds of shots and ran into a gunman who opened fire on them.

One student was killed outright and the rest fled under a hail of bullets, scaling a barbed wire fence under fire.

"I am here to bury my past and heal myself," said Wekesa, who said the two weeks of counseling provided by the government has been inadequate. "I am here to show respect to my three close friends Agnes, Edward and Cherop I managed to escape but they didn't."

According to political commentator Patrick Gathara, for the public there remain many unanswered questions about the government's performance such as the delayed response, the inability to stop the attack despite intelligence warnings and the fact that no one has been prosecuted for the security failures.

"Kenya is a country on the edge. People don't believe they are fundamentally safer despite what the government is saying," he said. "There is no evidence the government has learned from its failings."

A year since the attacks, Kenyan universities are prone to panic with four stampedes taking place in different institutions after students thought they heard gunshots or explosions. Hundreds have been injured and two died.
Last Update: Apr 02, 2016 11:46 pm