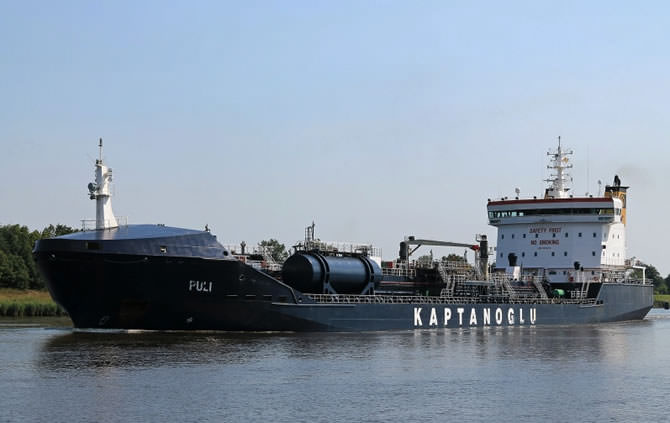 A private Turkish tanker ship with at least six Turkish crew members on board has been commandeered by pirates in the Port Harcourt area in southern Nigeria, Turkey's ambassador to Abuja confirmed.

Çakıl added that the Turkish crew members, working for Istanbul-based company Kaptanoğlu Navigation, are in good health and the tanker is now offshore, 90 miles south of Nigeria.

The ambassador said he is in contact with the Foreign Ministry, the Nigerian Maritime Administration and Safety Agency, and the company.

"This area is extremely unsafe and the issue of piracy is very prevalent. We will do our best to secure the release [of the crew members] as soon as possible through legal channels," he said.

Speaking on the phone, Çakıl added that in previous instances of piracy seen in the same area, the criminals generally demand a ransom.

Turkish media outlets identified the ship as Maltese-flagged M/T Puli, which was carrying chemicals at the time of the incident. The ship's captain was among the abducted crew members.

Since 2009, sea pirates have abducted three Turkish ships. Turkish oil tanker İlena Mercan was abducted in 2009, but was released after 15 days. The second incident took place in 2013 when crude oil tanker MT Cotton attacked by pirates, who held the tanker for a week.

According to reports, some older militants in Nigeria chose to become pirates. Since 2011, 30 ships and more than 100 seamen have been kidnapped. While Somalian pirates attack ships to ask for money in exchange for the abducted crew, the Nigerian crews usually attack crude oil ships to sell the oil they take from the tankers.

Turkey is part of NATO's counter piracy mission Operation Ocean Shield in the Gulf of Aden and off the Horn of Africa and has dispatched warships to the region to ensure the safety of naval routes and deterrence of pirates.