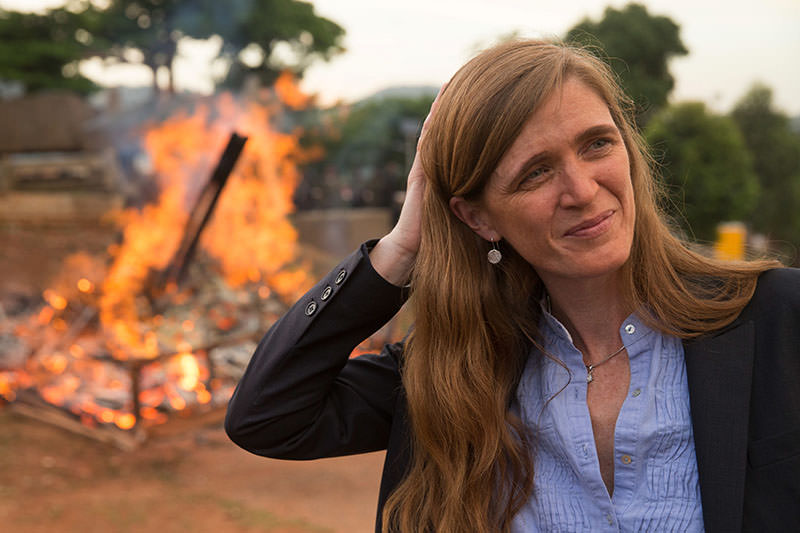 US Ambassador to the United Nations Samantha Power stands near the first Cameroon Ivory Burn at the Palais des Congres in Yaounde, Cameroon, April 19, 2016 (AP)
by Apr 20, 2016 12:00 am

A diplomatic convoy in Cameroon carrying the visiting US ambassador to the United Nations accidentally struck and killed a young boy on Monday.

Samantha Power is in Cameroon with officials from USAID, the Pentagon and the UN as part of Washington's effort to support local authorities in their fight against the extremist group Boko Haram.

"As we, the United Nations, and Cameroonian officials drove to Mokoko this morning, a vehicle in the convoy that we were a part of struck a young boy," Power told a news conference in Maroua, northern Cameroon.

"Although he received immediate medical care from an ambulance in our convoy, he died shortly thereafter," she said, according to a transcript provided by the State Department.

Power said she later visited the boy's family with UN, US and Cameroonian officials "to offer our profound condolences and to express our grief and heartbreak over what the family is going through."

US officials were not able to say whether their government will pay compensation to the boy's family.

Power told reporters the international community would help Cameroon fight Boko Haram, but it was important to have a strategy in place to provide security, development and human rights to vulnerable populations in liberated territory.

"I just want to underscore that America's support for this effort is one that cuts across all areas. We cannot defeat Boko Haram only using military force," she said.

"Of course, military force has to be part of it. They have guns, they have suicide vests, they have armored vehicles -- they have those things, and we will fight them.

"But we also have to ensure that as we take the fight to Boko Haram with us supporting you, that we do so in a manner that respects the lives of civilians."

Boko Haram is a dangerous guerrilla movement that emerged out of previous insurgencies in northeast Nigeria in 2009 and won global notoriety in April 2014 when it kidnapped 276 schoolgirls.

Nigeria and its neighbors Cameroon, Chad and Niger began a concerted fight against Boko Haram in January last year with support from several foreign powers, including the United States.

The insurgency has killed an estimated 20,000 people and forced some 2.6 million to flee their homes.