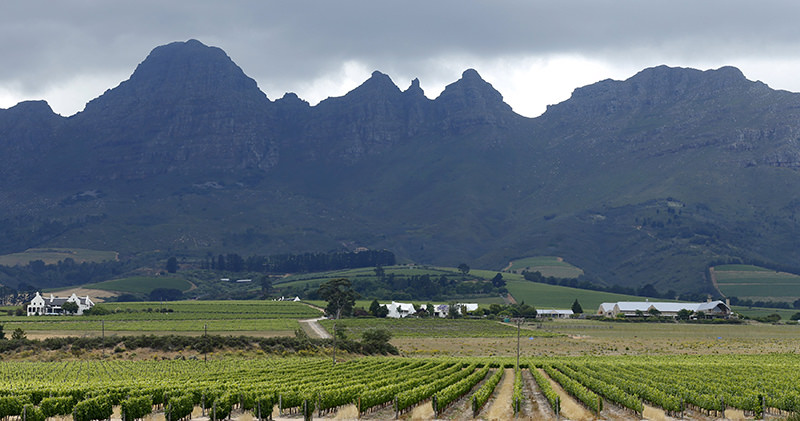 Vineyards sit beneath hills at a farm near Stellenbosch, in the country's wine producing region, South Africa, November 13, 2015 (Reuters Photo)
by Anadolu Agency Apr 27, 2016 12:00 am

Since 1990, a total of 1,081 white commercial farmers have reportedly been murdered in South Africa, the Transvaal Agricultural Union of South Africa (TAU SA) has told Anadolu Agency.

Chris Van Zyl, assistant general manager of TAU SA, said the major reason for the attacks was basic criminality, but in some cases, racist comments were reportedly uttered at their victims.

"The [fact that the] majority of farmers murdered were white whilst the criminals were black, poses the question whether a racist bias was present or not," he told Anadolu Agency in an interview.

According to TAU SA, 60 black farmers were murdered on their farms in the same time period.

The majority of commercial farmers in the country are white, as is the union. Van Zyl a retired military major general who now dedicates his time to research farm attacks, says the latter are usually brutal compared to other crimes in the country.

He said farmers and their families were usually tied up and repeatedly tortured by criminals during the attacks, leading either to serious injuries or death.

"Evidence of deliberate torture is present in many cases," he said.

He said that although farm attacks happened frequently in South Africa, they are rarely reported in the media.

"We depend on informal sources to compile the statistics because the police have ceased to make the figures public," he said.

A media liaison officer with the government body Statistics SA told Anadolu Agency, it did not release statistics on farm murders.

Politics professor Andre Duvenhage of the North-West University, near Johannesburg, said relaxed security in rural areas had greatly contributed to these attacks.

"I also strongly believe there are elements of racism in some of these attacks. Because sometimes you find some people are killed brutally with 60 stab wounds. This is excessively cruel," he told Anadolu Agency Monday.

In a 2014 report, titled The Reality of Farm Tortures in South Africa, civil rights group AfriForum said that, 15 years ago, there were 100,000 commercial farmers in the country. The numbers drastically declined to 36,000 today, mainly due to violence against farmers. But Lorraine Claasen, a researcher at AFri-Forum, acknowledged there were other reasons pushing out farmers.

"Big farms are buying out smaller ones, while there is the issue of the Land Claims Act where the state buys land from farmers and redistributes [it] to landless people," Claasen explained.

"If the crisis of farm murders and tortures is not addressed, it will impact negatively not only the agricultural community, but South Africa as a whole," the group warned.

"This year seems to be extremely violent regarding the number of murders committed during the attacks," Lorraine Claasen told Anadolu Agency.

Claasen added certain white farmers and their families had already emigrated from South Africa because of fear of being attacked.

South Africa has one of the leading crime rates in the world. Crime statistics, released in October 2015, revealed that 17,805 people were murdered in South Africa between April 1, 2014 and March 31, 2015.

The figures show that 49 people are killed each day in Africa's most developed economy.

''The police have a rural safety program dealing with crimes in rural areas where these farms are located,'' he told Anadolu Agency on Monday.

He said the police have a good working relationship with farming communities particularly those with community policing forums.

"We are doing our best in eradicating crime. We are also working with farmers to avoid stock theft in their areas,''he added.