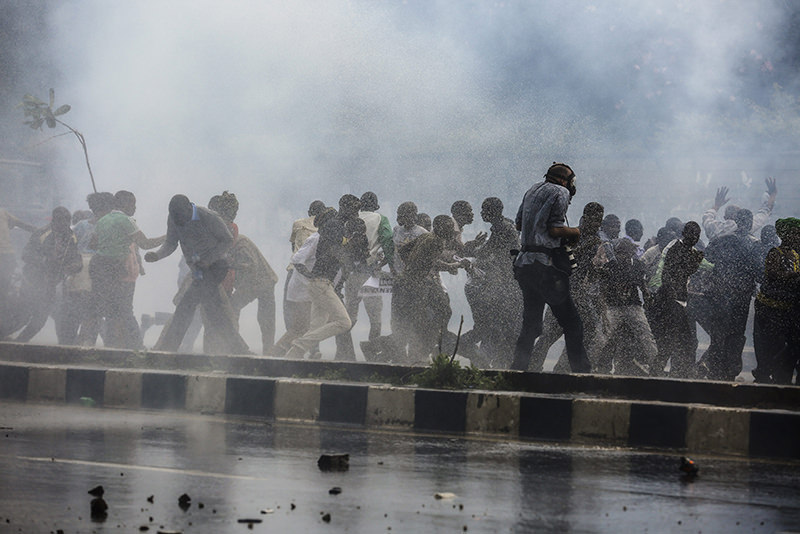 Opposition supporters staged a protest two weeks in a row against the country's electoral body in an attempt to push for the reforms ahead of the next year's general elections. (EPA Photo)
by reuters
May 16, 2016 12:00 am

Kenyan police fired tear gas and water cannon on Monday at stone-throwing crowds protesting in central Nairobi against an election oversight body they say is biased and should be scrapped, Reuters witnesses reported.

Officers armed with batons confronted hundreds of protesters outside the offices of the Independent Electoral and Boundaries Commission (IEBC), the third clash over the issue in less than a month. The opposition leader said more protests would follow.

Kenya does not hold its next presidential and parliamentary polls until August 2017, but politicians are already trying to galvanise their supporters in a nation where violence erupted after the 2007 vote and the opposition disputed the 2013 result.

The opposition CORD coalition, led by Raila Odinga who lost the 2013 vote and unsuccessfully challenged the result in court, has accused the IEBC of bias and said its members should quit. IEBC officials have dismissed the charge and say they will stay.

"For free and fair election, IEBC must go," read a banner held aloft by one demonstrator on Monday.

As the number of protesters grew, police fired tear gas and water cannon at them from trucks parked nearby. A Reuters witness saw one protester carrying a bag of stones, while others threw them at police ranks. Police struck some protesters with batons.

"Despite the use of undue force by police, our peaceful pickets shall continue every week until the IEBC is reformed," Odinga wrote on Twitter.

The Daily Nation website reported protests and scuffles with police in other cities, including Kisumu and Kisii, both in western Kenya.

Police also used tear gas against protesters at two similar demonstrations in Nairobi over the past month, most recently last week.

President Uhuru Kenyatta, who is expected to seek re-election next year for a second and final term, has urged opponents not to take to the streets.

Despite the 2013 legal challenge, that vote proceeded smoothly and Odinga accepted the court ruling in a nation where ethnic loyalties usually trump policy among voters.

After the disputed 2007 vote, about 1,200 were killed in ethnic fighting. Western diplomats have urged the authorities to work carefully with citizens to ensure peaceful elections in 2017.