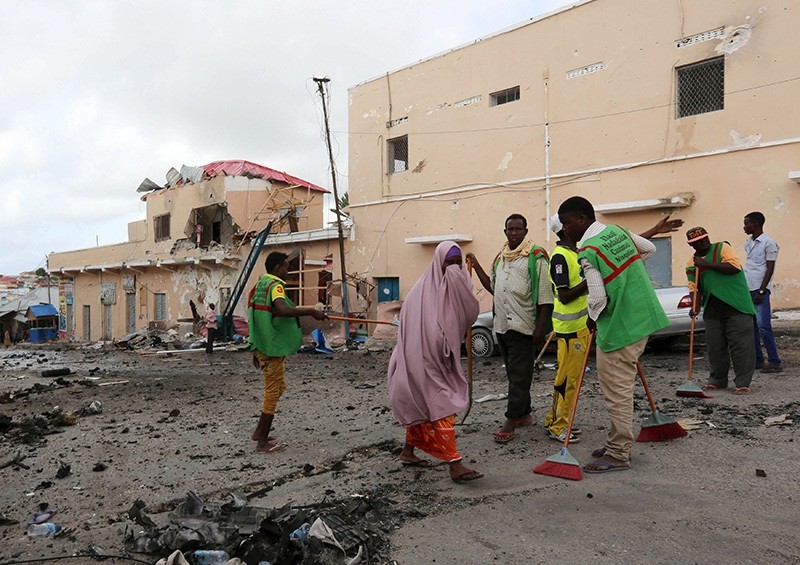 Gunmen holed up in a central Mogadishu hotel for more than 12 hours killed at least 10 people in the latest attack in Somalia by the al-Qaida-linked group, al-Shabaab.

A huge car bomb that tore the front of the six-story Ambassador Hotel in the heart of the capital signaled the start of the assault on Wednesday evening, with shooting continuing until Thursday morning when Somalia's security minister declared the attack over. "All the gunmen were killed by the security forces," said Security Minister Abdirizak Omar Mohamed. "More than 10 people are so far confirmed dead and many others are wounded," he told reporters, adding that rescuers were searching the badly-damaged building for survivors and bodies.

The toll was expected to rise as rescue and recovery efforts continued Thursday. Medical sources said around 40 people were known to be injured so far. As Mohamed spoke, the bodies of three suspected attackers were displayed in the dirt outside the hotel. Al-Shabaab was quick to claim responsibility for the attack and has regularly targeted hotels popular with government officials and wealthy Somalis in the past. The African Union Mission in Somalia (AMISOM), which protects the internationally-backed government and fights al-Shabaab, said two parliamentarians were among the dead.

Witnesses said the initial explosion, believed to be the result of a suicide car bomber ramming a vehicle into the hotel, was large by Mogadishu standards. Smoke rose from burning cars and debris was strewn across Maka al-Mukarama, the capital's usually busy main street. Mohamed Elmi, who was nearby at the time, said the blast "destroyed the whole area." An unknown number of gunmen then entered the hotel after the blast. Gunfire continued throughout the night and could still be heard at dawn on Thursday.

Al-Shabaab, a group affiliated with al-Qaida, lost its foothold in the capital in 2011, but continues its battle to overthrow the Somali government and launches regular attacks on military, government and civilian targets in Mogadishu and elsewhere. Violence is expected to increase with the start of the Islamic holy month of Ramadan next week, a time when al-Shabaab traditionally ups the tempo of its attacks.

Also on Wednesday, Somali special forces claimed to have killed Mohamed Mohamud Ali – also known as Dulyadin and Kuno – the suspected organizer of an attack on a university in Garissa, Kenya, in April 2015 that killed 148 people, mostly students. "Sixteen armed men, four of them senior commanders including Mohamed Mohamud Ali … were killed by the Somali commandos and the special forces of Jubaland," said Abdirashid Janan, security minister for Jubaland, a federal state in southern Somalia.

The Garissa attack was the deadliest in Kenya since the al-Qaida bombing of the United States embassy in 1998 and was carried out by four gunmen, all of whom died. The U.S. also said it had killed a senior al-Shabaab planner, Abdullahi Haji Da'ud, in a drone strike on May 27, the latest in an increasing number of airstrikes and U.S.-led or U.S.-backed raids in Somalia targeting al-Shabaab leaders and recruits. "Da'ud was one of [al-]Shabaab's most senior military planners and served as a principal coordinator of militia attacks in Somalia, Kenya and Uganda," Pentagon spokesman Peter Cook said. He added that Da'ud was "presumed killed."