Powerful explosion near bank in Beirut, no casualties 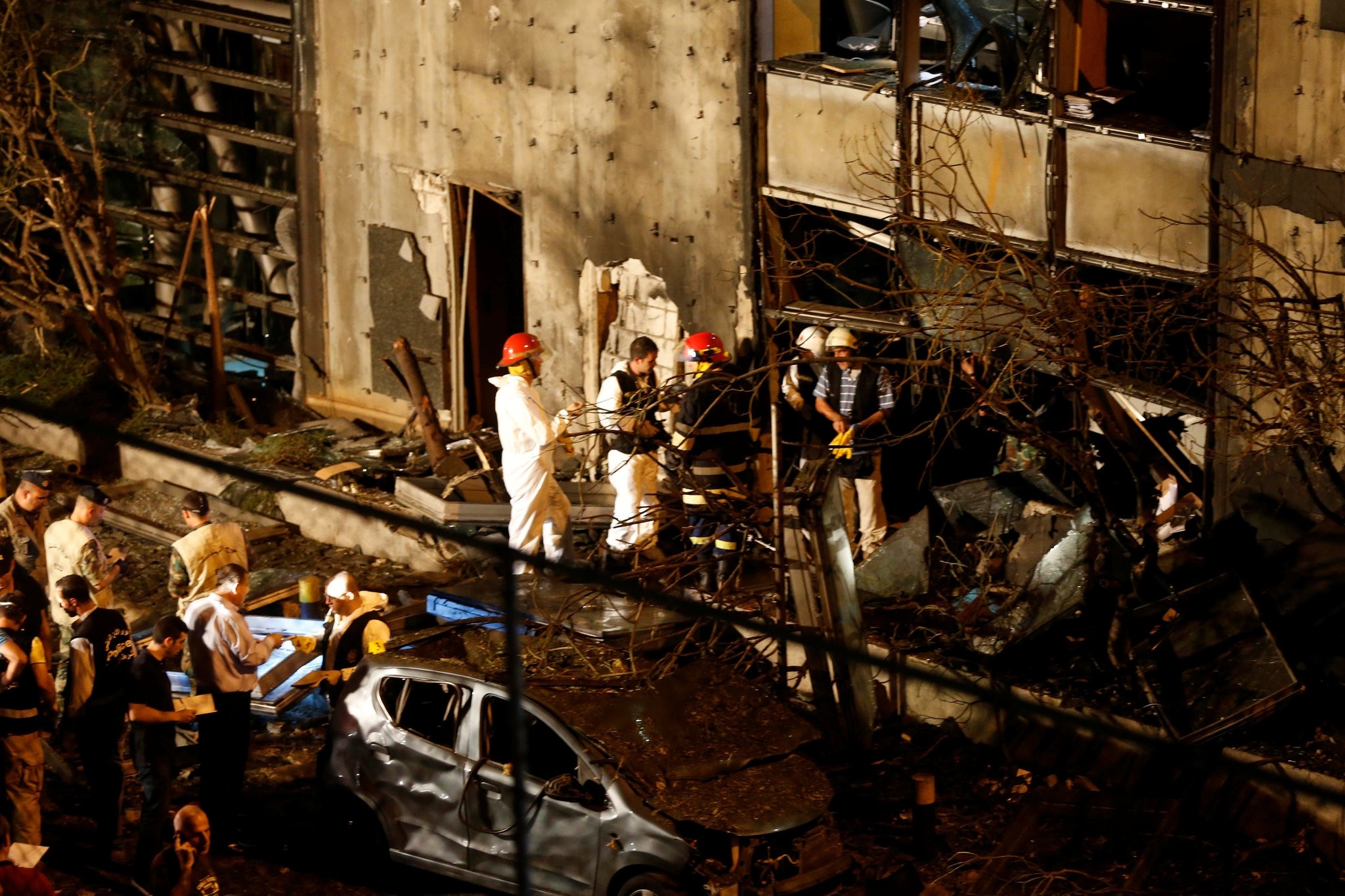 Forensic inspectors examine the site of an explosion at the headquarters of the Lebanese Blom Bank in Beirut, Lebanon June 12, 2016. (REUTERS Photo)
by Daily Sabah with Agencies Jun 12, 2016 12:00 am

A powerful explosion was heard in the western part of the Lebanese capital Beirut late on Sunday near Blom Bank, causing damage to the building, witnesses and local media have said.

The sound of ambulance sirens was heard in the area near the busy shopping district of Hamra Street.

The bomb was left in a bag by the back wall of the building, Interior Minister Nohad Machnouk said.

"Politically it is clear that target was Blom Bank only," he said, adding that the attack had nothing to do with Daesh, which has mounted suicide bombings in Beirut. Machnouk said initial reports indicated there had been no fatalities.

An AFP correspondent saw almost all the entire glass facade of a branch of the BLOM BANK, one of the country's largest, blown out, with debris littering the ground.

The Lebanese banking sector has been at the centre of an escalating crisis since the United States passed a law targeting the finances of Hezbollah. The powerful Shi'ite Muslim group has launched verbal attacks on the central bank over the implementation of the act in Lebanon.

Blom Bank is one of the banks that has closed accounts belonging to people suspected of links to Hezbollah.

There was not immediate comment from Hezbollah on the bomb blast.

Smoke rose from the area. Local television showed footage of a damaged building, with one hole in a concrete wall, and said shattered glass had fallen to the ground from several storeys up.

A security source said the bomb had contained 2 kg (4 lb) of explosives. Interior Minister Nohad Machnouk said the device had been left in a bag by the back wall of the building.

"Politically it is clear that target was Blom Bank only," he said, adding that the attack had nothing to do with the militant group Daesh, which has mounted suicide bombings in Beirut. Machnouk said initial reports indicated there had been no fatalities.

The last bomb attack to hit the Lebanese capital killed more than 40 people in the southern suburbs, an area where Hezbollah is dominant. That bombing was claimed by Daesh.

Heavily-armed, Iran-backed Hezbollah, which is classified as a terrorist group by the United States, wields enormous political influence in Lebanon and its powerful military wing is playing a major role in backing Bashar Assad in the Syrian conflict.

It has ignited an unprecedented dispute between Hezbollah and a central bank widely seen as a pillar of the otherwise weak and dysfunctional Lebanese state.

The central bank has said the U.S. law must be applied to avoid the international isolation of Lebanon's banking sector.

Hezbollah has strongly criticised the bank for agreeing to measures it deems as part of a war against it.

Since 2001, the United States has put more than 100 individuals and entities affiliated with Hezbollah onto sanctions lists under existing anti-terrorism funding legislation, but the new law is aimed at Hezbollah specifically.

Hezbollah, whose fighters played a major role in forcing Israel to withdraw from southern Lebanon in 2000, enjoys strong support in the Lebanese Shi'ite community. Its members include government ministers, lawmakers and local councillors.