Libyan forces brace for street battles against DAESH in Sirte 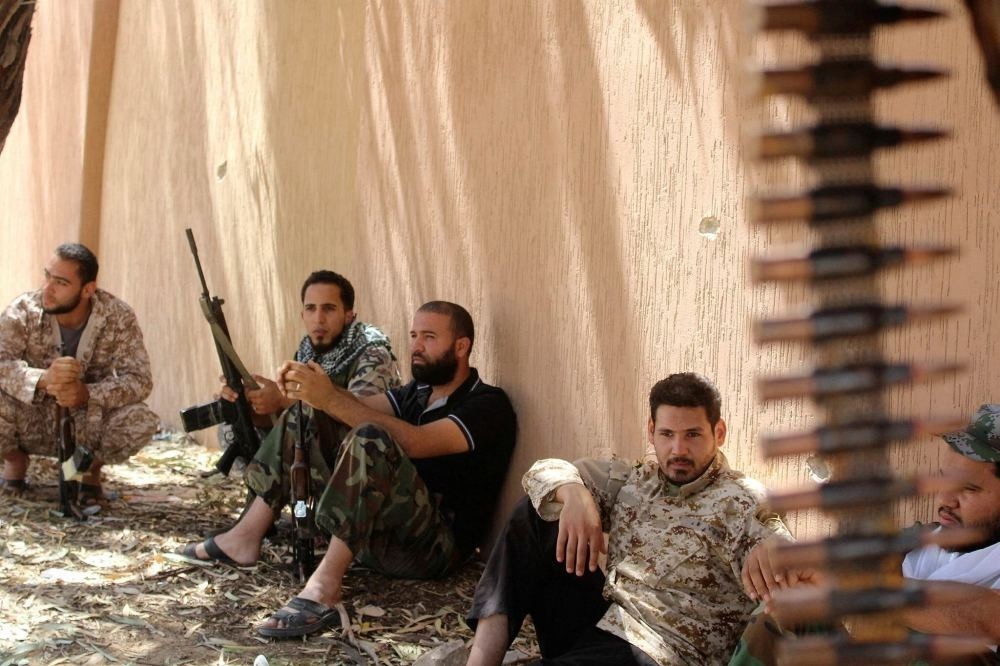 Fighters from forces aligned with Libya's new unity government rest after clearing the Zaafran area in Sirte.
by Daily Sabah with Wires Jun 13, 2016 12:00 am

The U.N.-backed unity government in Libya intensified its struggle against DAESH to recapture DAESH-held cities, especially Sirte. Government forces took control of the port from DAESH and are holding positions around the city

Militants from DAESH have barricaded themselves in the center of their stronghold in Libya's coastal city of Sirte, hoping to draw militias fighting to dislodge them into a protracted street battle, a spokesman for the fighters loyal to the U.N.-backed government said on Sunday. Brig-Gen. Mohammed al-Ghasri said the militants have fallen back to a densely built-up area, with their snipers taking positions on rooftops waiting for the militiamen to advance. He said DAESH suicide bombers were likely to target the militias if they close in on the area. The militias have been shelling the area with artillery, hoping that would disrupt the DAESH's defenses before their eventual advance. DAESH took over Sirte last year, exploiting Libya's turmoil to gain a foothold in the North African, oil-rich country. The fight to retake it is led by militias from the western city of Misrata. Some militants from Sirte have reportedly shaven off their beards to escape Sirte when the Misrata militiamen began advancing on the city in tanks and pickup trucks mounted with machine guns.

At the city's main roundabout, the militiamen last week dismantled the metal frame of what some Sirte residents had dubbed the "stage of horror", a podium used by DAESH for public beheadings during its yearlong reign over the city. Driving DAESH out of Sirte would mean the dismantling of the extremist group's strongest bastion outside Iraq and Syria, where DAESH controls vast swaths of territory and a string of cities. An overall triumph over DAESH in Libya would rid Egypt of a serious security threat just beyond its porous western border and terminate what has been a key supply route for men and weapons headed to the group's affiliate in the Sinai Peninsula. DAESH presence in Libya has also been a source of concern to southern European nations, particularly Italy, Libya's former colonizer.

Forces aligned with Libya's unity government said on Friday they had taken control of the port of Sirte, making further gains against DAESH. Brigades largely composed of fighters from Misrata advanced this week to the perimeter of Sirte's city center, after launching a counter attack against DAESH last month and driving the militant group back along the coastal road between the two cities. The brigades are part of an operation backed by Libya's U.N.-backed Government of National Accord (GNA), which arrived in Tripoli in March and has been gradually working to establish its authority. Western powers see it as the best bet for trying to unite Libya's political and armed factions against DAESH and for restoring some stability to the oil-rich North African country. A source from the operations room in Misrata said fighters from the front line in the south of Sirte had looped round to the seafront to capture the port, which lies about 5 km east of the city center. The brigades have advanced more swiftly than many expected, though their progress has been hampered by suicide bombers, mines and snipers. Clashes in Sirte on Friday left 11 brigade members dead and 35 wounded, the operations room source said. More than 100 fighters from the GNA-backed brigades have been killed and more than 500 wounded since the campaign to recapture Sirte began in early May.