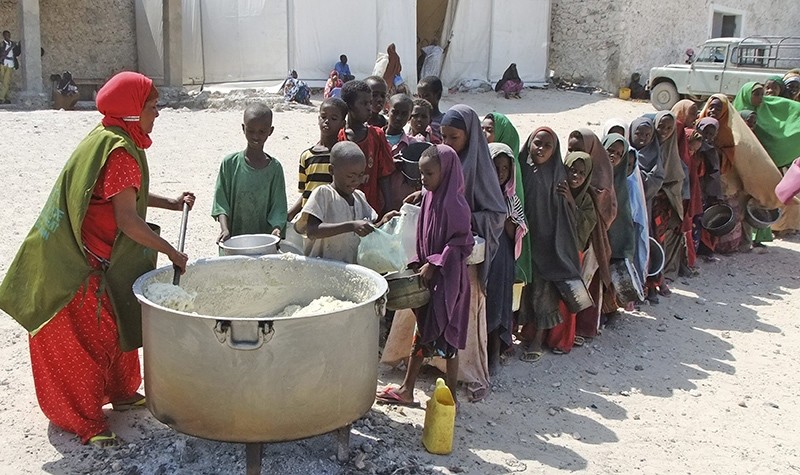 Children from southern Somalia line up to receive cooked food distributed by a local NGO in Mogadishu, Somalia, Thursday, Aug. 18, 2011 (AP Photo)
by Jun 15, 2016 12:00 am
The United Nations World Food Program (WFP) said Wednesday it was investigating allegations that it had tried to send expired and damaged food to needy people in south-western Somalia.

Senior police officer Abdullahi Barise had earlier said the authorities had Tuesday seized a plane about to take off from the capital Mogadishu to the town of Garbahaarey, because the 100 sacks of food on board included items that had expired.

Cooking oil had an expiry date in 2015, while locally produced maize, beans and sorghum had gone bad after being held in a Mogadishu warehouse, Barise said.

He said the 100 sacks contained tons of food, but was unable to give the exact amount.

It was the first time that a plane transporting food aid has been seized in Somalia.

"We are looking into this incident," said Challiss McDonough, a spokeswoman for WFP in Nairobi.

"We do not believe that any of the food in our Mogadishu facilities is past its expiration date, but are checking whether any of the commodities may have been improperly stored and damaged," she said by e-mail.

"The well-being of the people we assist is our top priority, and we take every possible measure to see that the food we distribute meets the highest standards of quality and safety," the spokeswoman added.

"We are in communication with the local authorities and hope to resolve the matter soon."
Last Update: Jun 15, 2016 11:55 pm
RELATED TOPICS