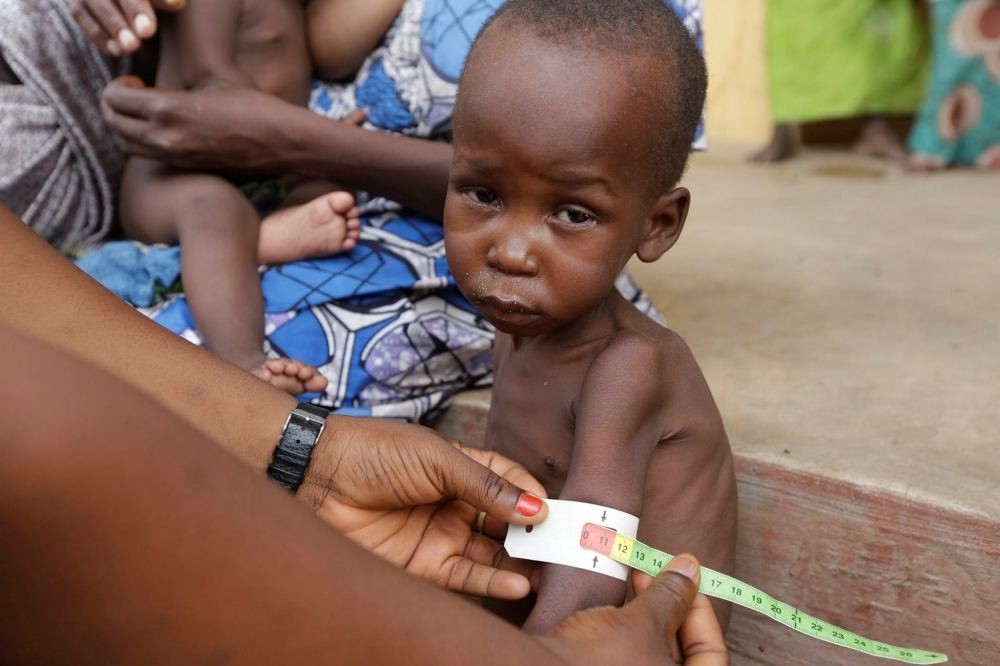 At least 1,200 refugees in Nigeria fleeing Boko Haram have died of starvation and dehydration. Doctors Without Borders said thousands of refugees also face death as they have no access to food or clean water

More than 1,200 people have died from starvation and illness at an aid camp in northeastern Nigeria that houses people fleeing the militant group Boko Haram, medical charity Doctors Without Borders (Medecins Sans Frontieres) said on Thursday. Nearly 200 refugees from Boko Haram have died of starvation and dehydration in the northeastern Nigerian city of Bama in the past month, MSF said. The refugees "speak of children dying of hunger and digging new graves every day," according to a statement from the group, also known by its French acronym MSF. "A catastrophic humanitarian emergency" is unfolding at a makeshift camp on a hospital compound where 24,000 people have taken refuge, it said. The doctors referred 16 emaciated children at risk of dying to their special feeding center in Maiduguri. One in five of the 15,000 children are suffering severe acute malnutrition, the group found. "We see the trauma on the faces of our patients who have witnessed and survived many horrors," said Ghada Hatim, head of the Doctors Without Borders mission in Nigeria. Her team reached Bama on Tuesday following a military convoy from Maiduguri, the Borno state capital that is the headquarters of Nigeria's military campaign. Though Bama is just 70 kilometers southeast of Maiduguri, ongoing clashes between the militants and troops make travel unsafe and farmers have not planted crops for 18 months, Dr. Christopher Mampula of Doctors Without Borders explained by telephone from Paris. Boko Haram fighters routinely burn down homes and destroy wells, leaving few water sources in an area where temperatures often soar above 40 degrees. The militants seized Bama in September 2014 and Nigerian troops recaptured it in March 2015. Nigeria's military has greatly curtailed the 7-year-old insurgency that has killed some 20,000 people, but militants still attack villages, deploy suicide bombers and have staged attacks across Nigeria's borders in Chad, Niger and Cameroon. The refugees in Bama are among 1.8 million Nigerians forced from their homes and living inside the country, with another 155,000 in neighboring countries, according to the United Nations.

The U.N. High Commissioner for Refugees (UNHCR) released a report on World Refugee Day that indicated that persecution and conflict in places like Syria and Afghanistan raised the total number of refugees and internally displaced people worldwide to a record 65.3 million at the end of last year. The previous year had already seen the highest number of refugees worldwide since World War II, with 60 million displaced people. But last year, when Europe staggered under the arrival of large numbers of migrants, topped that record by nearly 10 percent, the UNHCR said Monday, unveiling its annual Global Trends Report. The figures underscore twin pressures fueling an unprecedented global displacement crisis. As conflict and persecution force growing numbers of people to flee, anti-migrant political sentiment has strained the will to resettle refugees, UNHCR chief Filippo Grandi said.

The agency urged leaders from Europe and elsewhere to do more to end the wars that are fanning the exoduses of people from their homelands. "I hope that the message carried by those forcibly displaced reaches the leaderships: We need action, political action, to stop conflicts," Grandi said. "The message that they have carried is: 'If you don't solve problems, problems will come to you.'" Grandi said policymakers and advocacy groups admittedly face daunting challenges helping the largest subset of displaced people: Some 40.8 million internally displaced in countries in conflict. Another 21.3 million were refugees and some 3.2 million more were seeking asylum. More than a million people fled to Europe last year, causing a political crisis in the EU. Grandi called on countries to work to fight the xenophobia that has accompanied the rise in refugee populations, and decried both physical barriers like fences erected by some European countries as well as legislative ones that limit access to richer, more peaceful EU states. Such European policies were "spreading a negative example around the world," he said. "There is no plan b for Europe in the long run. Europe will continue to receive people seeking asylum. Their numbers may vary ... but it is inevitable," Grandi said.

The UNHCR said that on average, 24 people were displaced every minute of every day last year, or 34,000 people a day, up from six every minute in 2005. Global displacement has roughly doubled since 1997, and risen 50 percent since 2011 alone when the Syria civil war began. Displacement figures have been rising since the mid-1990s, but the rate of increase has jumped since the outbreak of Syria's civil war in 2011. The number of people displaced rose by 5.8 million globally through 2015, according to the U.N. figures.
RELATED TOPICS