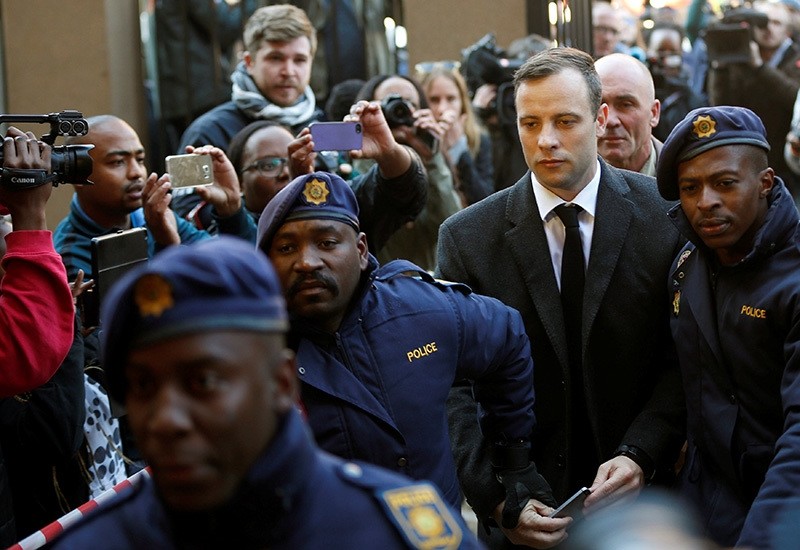 Olympic and Paralympic track star Oscar Pistorius is escorted by police officers as he arrives for his sentencing for the 2013 murder of his girlfriend Reeva Steenkamp, at North Gauteng High Court, Pretoria, S. Africa, July 6, 2016. (Reuters Photo)
by Associated Press Jul 06, 2016 12:00 am

Oscar Pistorius was sentenced to six years in prison Wednesday for the murder of girlfriend Reeva Steenkamp, with the judge who decided the punishment calling the double-amputee Olympian a "fallen hero."

South Africa's minimum sentence for murder is 15 years but the judge said "substantial and compelling circumstances" existed to give Pistorius a lesser sentence for shooting Steenkamp at his home in 2013.

Pistorius was asked to stand and face Judge Masipa as she announced his sentence in a courtroom in the South African capital, Pretoria. He was calm after the sentence was announced, embracing his aunt and tearful sister before being led down a courtroom staircase to a holding cell.

Steenkamp's parents, Barry and June, were also present in the courtroom, which was packed with relatives of both Pistorius and Steenkamp, journalists and other observers.

After announcing Pistorius' sentence, the judge ordered a recess to give prosecutors and Pistorius' defense lawyers time to decide they want to appeal the sentence. It was not immediately clear if either would.

Prosecutors had sought at least 15 years in prison for the 29-year-old Pistorius. His defense lawyers had asked for no jail time at all for the athlete, and asked that he be allowed to do charity work with children.

The sentencing is the latest act of a three-and-a-half year legal drama that has often played out on live television and shown the fall from grace of a runner once viewed as an inspiration to many for overcoming his disability. Pistorius had both legs amputated below the knees when he was 11 months old because of a congenital defect.

He made history by running at the 2012 Olympics on his carbon-fiber running blades, and was one of the world's most recognizable athletes.

Pistorius killed Steenkamp, a 29-year-old model and reality TV star, in the pre-dawn hours of Valentine's Day in 2013 by shooting her multiple times through a toilet cubicle door in his home. Pistorius maintained he killed Steenkamp by mistake thinking she was an intruder hiding in the bathroom.

Prosecutors charged that he killed her intentionally after the couple argued.

In 2014, Pistorius was acquitted of murder by Masipa following a dramatic seven-month trial. He was instead convicted of manslaughter and served one year in prison.