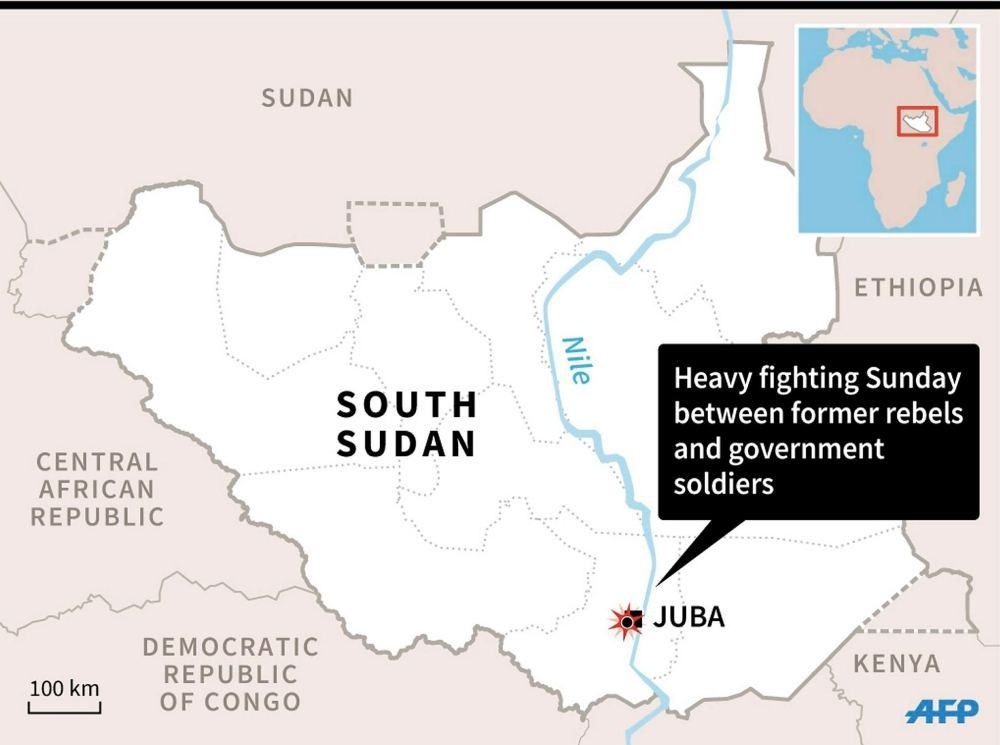 by reuters Jul 11, 2016 12:00 am
At least 272 people have died in fighting between South Sudan's rival factions in the capital Juba, including 33 civilians, a government source said on Sunday, as heavy gunfire erupted again in the city and many residents sought shelter at a U.N. base. The fighting first broke out on Thursday and Friday between troops loyal to President Salva Kiir and soldiers who support vice president Riek Machar. The violence raises fears South Sudan could slide back into conflict after emerging from a two-year civil war, which began in December 2013 after Kiir sacked Machar as vice president. Neighboring Kenya called for urgent action by the two leaders to move troops away from civilians and end the crisis. A government spokesman later said the situation had been brought under control. "At present the situation is calm," Michael Makuei, minister of information, said in a broadcast by South Sudanese TV. He said the government was calling on people to go back to their homes and that the situation was under control.

On Saturday Juba had been calm, but on Sunday a Reuters witness and residents said gunfire was heard in Gudele and Jebel suburbs of Juba, near the military barracks that hosts troops loyal to Machar. "For about 30 to 40 minutes we heard sounds of heavy artillery in the direction of Jebel area," an aid worker based in Juba who did not want to be named told Reuters. One resident, Daniel Samson, said he had seen a "massive migration" of people fleeing to calmer districts when there was a lull. "The gun shooting has stopped now," he said. Another resident, who only gave his name as Steven, said he had seen hundreds heading to a U.N. compound. "I saw dead bodies of civilians and others ... moving with blood on their bodies," he told Reuters by telephone.

Officials at the U.N. South Sudan mission UNMISS could not immediately be reached for comment. One eye witness saw soldiers apparently involved in looting, by entering a neighbor's shop and leaving with merchandise. It was not clear if those troops supported Kiir or Machar. A Health Ministry source told Reuters early on Sunday that at least 272 people had been killed, including 33 civilians, so far. There was no official statement on the death toll.

Kenya called on Kiir and Machar to resolve the latest crisis and urgently to move heavy weaponry and huge contingents of soldiers out of civilian spaces of the capital Juba, Kenyan presidential spokesman Manoah Espisu told a briefing. He said Kenya was ready to support law enforcement in Juba. Kenya Airways suspended flights to Juba. South Sudan's civil war was fought largely along ethnic lines with Kiir, a Dinka, and Machar, a Nuer, drawing support from their respective tribes.

A peace agreement last August ended the war but Kiir and Machar spent months after that wrangling over details and have yet to integrate their forces, a key part of the peace deal. Machar returned to Juba in April, which as seen as a step to end fighting. But experts said the failure to move swiftly to implement other aspects of the peace deal, such as re-integrating or demobilizing rival forces, risked a new conflict. U.N. Secretary-General Ban Ki-moon said on Friday the latest violence highlighted a lack of commitment to the peace process and urged the country's leaders to discipline military leaders and work together to implement the peace deal. On Friday, shooting had erupted even as Machar and Kiir were in talks to defuse tensions. Both called for calm and said they did not know what sparked the flare up, raising concerns about their ability to control their respective troops. The violence initially began late on Thursday, when soldiers loyal to Kiir demanded to search vehicles of Machar supporters. That stand-off led to clashes.
RELATED TOPICS