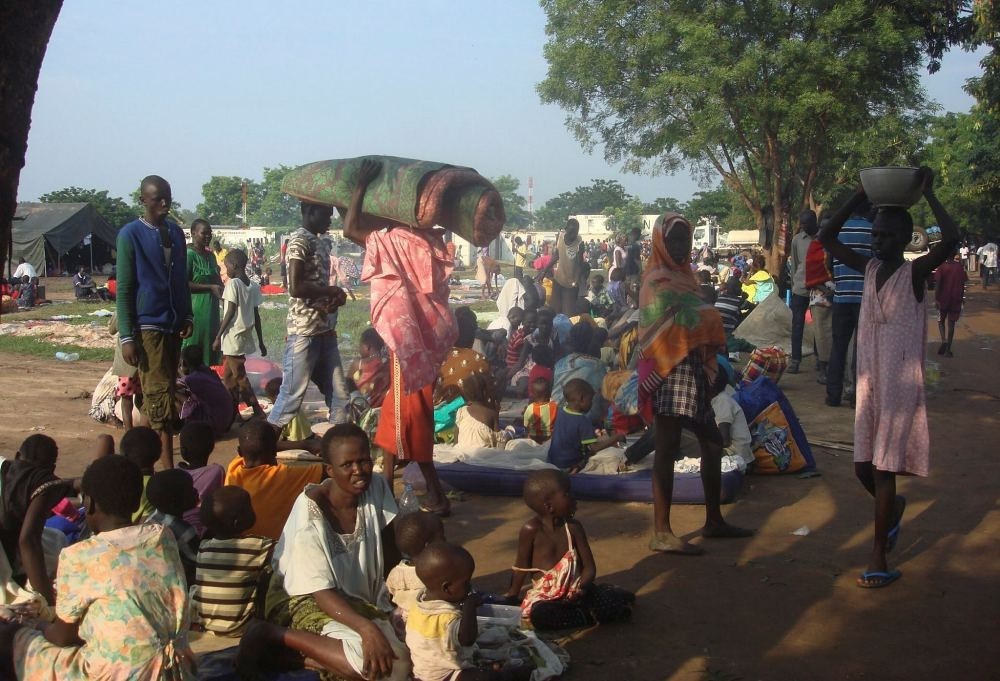 Recently established South Sudan is facing the threat of civil war as warring groups intensify fighting despite international calls. It is estimated that more than 300 people died due to clashes in less than a week

Heavy fighting involving tanks and helicopters raged in South Sudan on Monday between troops loyal to the president and those backing the vice president, risking a return to civil war and further instability in a volatile and poor region of Africa. Clashes between the forces of President Salva Kiir and Riek Machar - the former rebel leader who became vice president under a deal that ended a two-year civil war, have killed hundreds of people since they broke out in the capital Juba four days ago. The violence intensified on Monday; a Reuters witness saw two helicopters overhead firing in the direction of Machar's headquarters, while residents reported tanks on the street. A United Nations official said heavy gunfire had erupted around U.N. bases where hundreds of civilian have fled to shelter. The fighting broke out last week as the world's newest nation prepared to mark five years of independence from Sudan at the weekend. The U.N. Security Council on Sunday demanded Kiir and Machar rein in their forces and end the clashes. It was not immediately clear what the objective of either side was, but the violence has raised fears of a return to the civil war that erupted in late 2013 and broadly ran along ethnic lines, pitting Kiir, an ethnic Dinka, against Machar, a Nuer.

The conflict killed thousands of people, forced more than 2.5 million people from their homes and left almost half the population of 11 million people struggling to find food. Oil production, by far the biggest source of government revenue, has plummeted. A new flare-up risks driving yet more people to refugee camps in neighboring nations and further destabilizing a region in the center of Africa already plagued by myriad woes. Central African Republic is riven by conflict, the eastern region of the Democratic Republic of Congo is contending with a patchwork of militias and rebels groups, and Burundi is embroiled in a violent political crisis. Much is not clear about the latest violence in Juba, where mobile communication is unreliable and officials have proved difficult to contact. This includes whether either side is gaining an upper hand or how much control Kiir and Machar have over their forces.

Machar blamed the president for a heavy helicopter bombardment of his forces on Monday. "This tells (us) that our partner is not interested in peace," he wrote on Twitter, but he also said he had not lost hope for the future of a nation that "needs all of us." "I urge calm and restraint throughout these skirmishes. I'm safe. No one should take laws in their own hands to destabilize this country," he added. There was no immediate comment from Kiir's side. On Sunday, the president's information minister, Michael Makuei, had said the situation was under control and urged people to return home. There has been no official death toll but at least five soldiers died on Thursday and a Health Ministry source said 272 people, including 33 civilians, were killed on Friday alone.

United Nations mission UNMISS said gunfire had erupted on Monday around the U.N. headquarters in the Jebel area of Juba and also around a base near the airport. U.N. bases were hit by small arms and heavy weapons on Sunday, when one U.N. Chinese peacekeeper was killed. "We urge an end to these hostilities and hope they (political leaders) will return back to taking up all the action points of the peace agreement," UNMISS spokeswoman Shantal Persaud told Reuters by telephone. UNMISS said it was "outraged" by the violence. The U.N. Security Council, after Sunday's emergency meeting, told the two leaders to "do their utmost to control their respective forces, urgently end the fighting and prevent the spread of violence" and commit themselves to their peace deal. Attacks on civilians, U.N. personnel and U.N. premises might amount to war crimes that would need investigation, it said. Neighboring Kenya has urged South Sudan's leaders to end the clashes. The chairman of the ceasefire monitoring group Joint Monitoring and Evaluation Commission (JMEC), Festus Mogae, called for the peace deal signed last August to be implemented. But through the two-year civil war world powers and regional states struggled to find leverage over the warring factions, despite U.S. and European sanctions on some military leaders and African threats of punitive actions. Kiir and Machar have long been rivals for power, both in politics and on the battlefield. The civil war that erupted in December 2013 came a few months after Kiir sacked Machar as deputy. The pair signed a peace deal in August 2015, but then spent months wrangling over details. Machar finally returned to Juba in April, at the time seen as step towards cementing peace. But experts say the failure to implement swiftly key elements, such as the re-integration and demobilization of combatants, has allowed tension to fester and risked igniting a new conflict.

The violence and civil war are not new in the country. In December 2013, soldiers loyal to either side skirmished in the capital, Juba, and the fighting spread to other parts of the country. The violence was especially worrying because of the ethnic tensions involved, as many supporters of the president were Dinka and supporters of Machar, now a rebel leader, were mostly Nuer. As fighting raged into 2015, tens of thousands of people were reported killed, and an estimated 2 million people fled their homes. Meanwhile, the U.N. and others warned repeatedly of a humanitarian disaster as the civil war made it all but impossible to deliver aid to many areas of the country. Troops on both sides have been accused of horrific human rights abuses, including gang rapes and murders of civilians along ethnic lines. A U.N. panel of experts has said Kiir and Machar themselves bear command responsibility for troops who allegedly committed crimes.
RELATED TOPICS