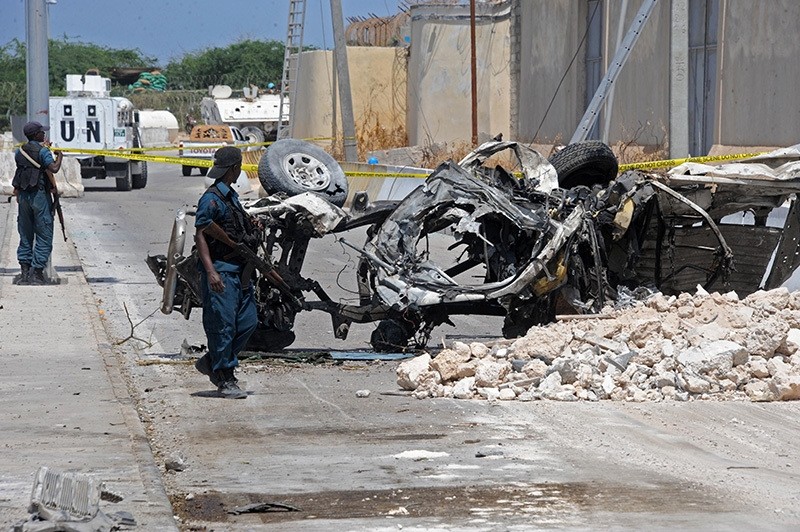 At least 13 people were killed on Tuesday in twin bombings near UN and African Union buildings by Mogadishu's airport, police said, in what the terrorist Shabaab group claimed as a suicide attack.

The Al-Qaeda aligned Shabaab group is blamed for a string of bloody assaults in Somalia and neighbouring Kenya, and is fighting to overthrow Mogadishu's internationally-backed government.

"At least 13 people were confirmed to have died in two explosions, one of the vehicles went off near a security checkpoint and another close to a UN compound," said Bishaar Abdi Gedi, a police official.

The attack was condemned by the African Union and the United Nations, which noted that none of its personnel were among the confirmed dead.

"This horrific incident is a fresh example of the extremists' desperate attempts to disrupt political progress", said Michael Keating, the UN's special representative for Somalia.

A Shabaab statement said it was a suicide attack by its militants.

"The two explosions were carried out by two brave Mujahedeen suicide bombers and they have targeted two different locations where the so-called AMISOM peacekeepers are stationed," it said, referring to the African Union mission to Somalia.

An AFP journalist at the scene heard gunfire after the explosions tore through the area. A portion of the airport's boundary wall was partially destroyed by one of the car bombs.

The city's airport is heavily fortified and adjoins the capital's main base for AMISOM, the 22,000-strong force backing the government in the battle against Shabaab insurgents.

AMISOM troops were deployed to Somalia in 2007 to defend the government against attacks by the Shabaab.

"Around 9am there was an explosion outside one of our gates, about 200 metres away," mission spokesman Joe Kibet told AFP.

"It looks like an attack, they intended to attack. Now the situation is calm and our personnel is working on it," he added.

The African Union denounced on Twitter the "senseless" assault, intended "solely to disrupt and paralyse the lives of ordinary Somalians."

The Shabaab were forced out of the capital five years ago but continue to carry out regular attacks on military, government and civilian targets.

In recent months they have claimed attacks on AMISOM's bases as well as civilian targets including hotels.

This year is considered critical for the group, which is eager to disrupt an expected change of government leadership due in the coming months.

Somalia was supposed to hold national elections this year but is instead going to hold what diplomats call a "limited franchise election" in which ordinary citizens do not participate.

The UN now hopes a one-person-one-vote election will be possible in 2020.