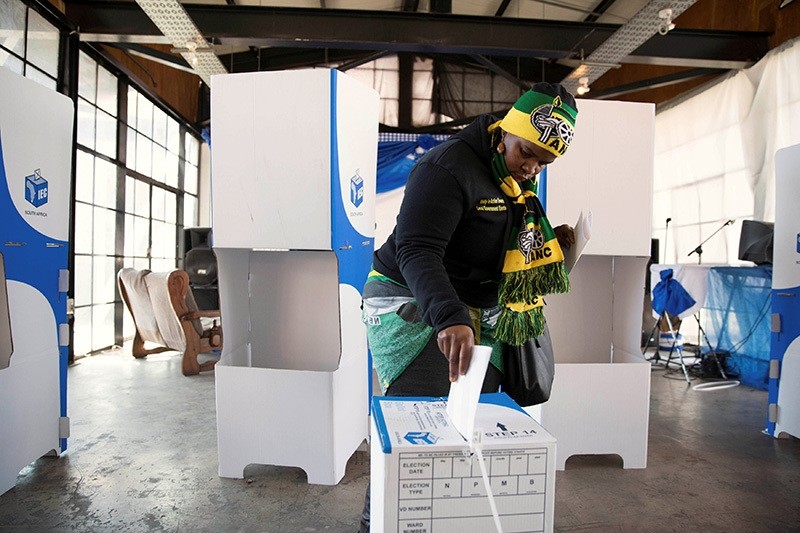 With the count well under way, early results put the ANC ahead nationwide but with its lowest-ever levels of backing.

The main opposition Democratic Alliance (DA) was on course to hold Cape Town and was inching ahead in the capital Pretoria and the economic hub Johannesburg as well as in the city of Port Elizabeth.

The ANC has won more than 60 percent of the vote at every election since the country's first multi-racial vote in 1994 when Nelson Mandela was sworn in as president.

With about half of the vote counted, the ANC had 52 percent support nationwide, with the DA on 30 percent and the radical leftist Economic Freedom Fighters (EFF) on seven percent, according to official results.

The count is seen as a marker ahead of the next general election due in 2019.

The poll is also a mid-term reflection on the performance of President Jacob Zuma, who has been plagued by economic woes and a series of scandals since taking office in 2009.

The ANC has dominated the political landscape since the fall of white-minority rule, but a faltering economy, rampant corruption and soaring unemployment have eaten into the party's popularity.

A final Ipsos survey earlier this week placed the ANC and DA in a close battle for the key cities after some undecided voters drifted back to the ruling party.

"I just think we now need change in our country. Let's give the DA a chance and see what happens."

Both the ANC and DA may be forced to court smaller parties and independent candidates to cobble together outright municipal majorities.

Even if the ANC maintains its hold on local power through party alliances, any overall drop in support would be a loss, said Silke.

"Simply to form a coalition in Pretoria, the capital, would be an embarrassment," independent analyst Daniel Silke told AFP.

"What it really will say is that few results are certain in South African politics any more (and) that the certainty the ANC has enjoyed for so long would simply be negated."

Contesting its first local poll after bursting onto the scene in the 2014 general election, the far-left Economic Freedom Fighters may find itself playing kingmaker.

The party, which won six percent of the vote in 2014, advocates land redistribution without compensation and the nationalization of mines.

A record 26.3 million people registered to choose mayors and other local representatives responsible for hot-button issues including water, sanitation and power supplies.

With most of the result due in Thursday, a major collapse of support for the ANC could pile pressure on Zuma, 74, to step down before his second term ends in 2019.