Washington Post: US, British troops in Libya for support 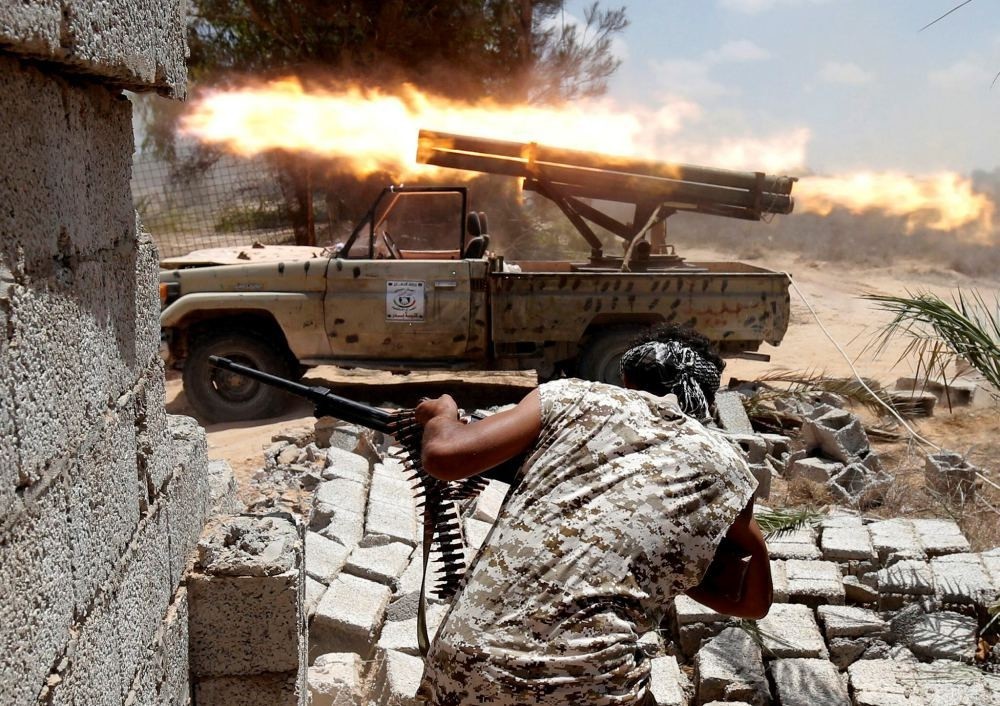 Libyan forces allied with the U.N.-backed government fire during a battle with DAESH militants in Sirte.
by Compiled from Wire Services Aug 11, 2016 12:00 am

The Washington Post reported that U.S. and British troops have started directly supporting Libyan forces against DAESH. A Pentagon official confirmed that a small number of U.S. forces are present in Libya

American special operations troops have for the first time started directly supporting Libyan forces battling DAESH in their key stronghold of Sirte, The Washington Post reported Tuesday. U.S. troops have been assisting Libyan government forces as they seek to oust DAESH from its most powerful stronghold outside of the Middle East, the Pentagon confirmed Tuesday. Henrietta Levin, a Pentagon spokeswoman, said in a statement that "a small number of U.S. forces" have been going in and out of Libya "to exchange information with local forces." She did not disclose an estimate on the number of U.S. forces. The Libyan government has set up joint operations rooms away from the frontlines as it seeks to remove DAESH from its Libyan stronghold in Sirte, according to the Pentagon.

The city lies about midway between Tripoli and Benghazi. DAESH seized it in 2015 amid the chaos that followed the country's revolution. Levin told Anadolu Agency that the information being shared with Libya's U.N.-recognized Government of National Accord forces includes "key information about the fight in Sirte, and strikes against DAESH targets inside Sirte." There are not currently any plans for U.S. forces to conduct advice and assist operations for the Libyan forces, she added. The Obama administration announced earlier this month that it would carry out airstrikes to help Libya's government oust DAESH from its Libyan capital, marking a notable expansion in the war against the terror group. To date, the U.S. has carried out 28 airstrikes, including eight Monday, since Aug. 1, according to the U.S.'s African command.

"U.S. officials, who spoke on the condition of anonymity to discuss a mission that has not been announced publicly, said the American troops were operating out of a joint operations center on the city's outskirts and that their role was limited to supporting forces loyal to the country's fragile unity government," the Post said. "The new American operation in Sirte is the culmination of an extended, low-visibility mission in Libya by U.S. special operators, who established small outposts in recent months as part of an effort to build ties with friendly forces and increase American understanding of the complexities of political and militia factions. Previously, U.S. troops focused on holding talks with an array of militia factions to identify potential partners and gathering information about the situation on the ground, including the threat from DAESH," it added.

The head of Libya's Government of National Accord (GNA) said Wednesday the country did not need foreign troops on the ground in the fight against DAESH group. "We do not need foreign troops on Libyan soil," Fayez al-Sarraj said in an interview with Italy's Corriere della Sera daily. "Our men can manage alone once they have cover from the air. I only asked for U.S. air strikes which must be very precise and limited in time and geographical scope, always carried out in coordination with us," he said.

Meanwhile, western countries including the United States, France and Britain said in a joint statement on Wednesday they were concerned by mounting tension around the Zueitina oil terminal in Libya. Washington, Paris, London and the governments of Germany, Spain and Italy urged a return to government control of all oil and gas installations and called on all parties "to abstain from any act of hostility and avoid all actions that could damage or disrupt energy infrastructure".
RELATED TOPICS