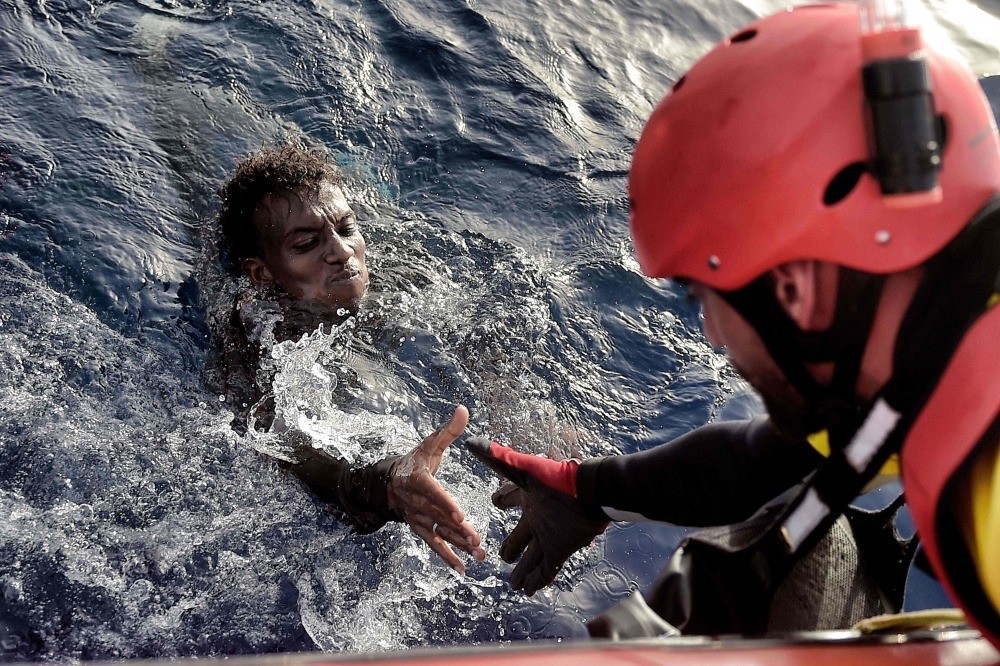 by Compiled from Wire Services Oct 05, 2016 12:00 am
About 6,055 migrants were rescued and 30 found dead on the perilous-sea route to Europe on Monday, one of the highest numbers in a single day, Italian and Libyan officials said. Italy's coast guard said at least nine migrants had died and a pregnant woman and a child had been taken by helicopter to a hospital on the Italian island of Lampedusa, halfway between Sicily and the Libyan coast. Libyan officials said 11 migrant bodies had washed up on a beach east of the capital, Tripoli, and another two migrants had died when a boat sank off the western city of Sabratha.

One Italian coast guard ship rescued about 725 migrants from a single rubber boat, just one of around 20 rescue operations during the day. About 10 ships from the coast guard, the navy and humanitarian organizations were involved in the rescues, most of which took place some 30 miles off the coast of Libya. Libyan naval and coast guard patrols intercepted three separate boats carrying more than 450 migrants, officials said.

In a poignant reminder of the ongoing drama being played out on Europe's southern shores, the coast guard coordinated the rescue of a total of 39 distressed vessels. The bulk of them overcrowded rubber dinghies, but also included five converted fishing boats, crammed full of people, mostly Africans.

Just under 200 minors were among those saved from one of the former fishing boats which had some 720 people on board, according to SOS Mediterranée, a civil European organization for saving lives at sea.

Most of the minors were unaccompanied and nine were under five years old. At least 10 of the 191 women on board were pregnant. During one rescue headed by the Doctors without Borders (MSF) charity, two women and a child had to be evacuated for medical treatment after suffering severe burns caused by spilled fuel.

A young-pregnant woman died from her burns after being rescued during a second operation by the MSF boat, the charity said. "It is unacceptable that in 2016 these people have no other choice than to embark on these incredibly-dangerous sea journeys," said MSF coordinator Nicolas Papachrysostomou. The Italian coast guard said the operations had taken place in an area around 30 miles north of the Libyan capital, Tripoli.

Separately, a Libyan coast guard official said that two children and nine women died on Monday when a small boat carrying migrants to Italy capsized off the shore of Libya. It was unclear if the two fatal incidents were separate.

Monday was the third anniversary of the sinking of a migrant boat off the Italian island of Lampedusa in which 386 people died. In the disaster three years ago, a fishing boat packed with some 500 people caught fire and sank rapidly in darkness just off the outlying Italian island of Lampedusa on the night of Oct. 2-3. The disaster resulted in Italy's navy launching large-scale search and rescue operations that has since evolved into a multi-national effort involving groups like MSF and Save the Children. Hundreds of thousands have been rescued, but at least 11,000 people have drowned in the Mediterranean since the Lampedusa tragedy according to figures collated by the U.N. refugee agency.

Libya has become the main jump-off point for migrants heading for Europe. According to the International Organization for Migration (IOM), there are more than 264,000 refugees and migrants currently in the war-torn country. After a proposal by Hungry to establish a "city for refugees" in the North African country, the Libyan unity government slammed Hungarian prime minister's call saying that it is "violation to Libya's sovereignty, territorial integrity and independence." The Libyan Foreign Ministry said Orban's call "does not serve cooperation between Libya, Hungary and EU countries." Speaking at a summit of EU leaders in Vienna on Saturday, Hungarian Prime Minister Victor Orban said a "giant refugee city" should be built on the Libyan coast to process asylum claims before they reach to Europe. Some 170 Libyan activists signed a statement rejecting the Hungarian proposal and sent it to diplomatic representatives of the EU, U.N., the African Union and Arab League in Libya.
RELATED TOPICS