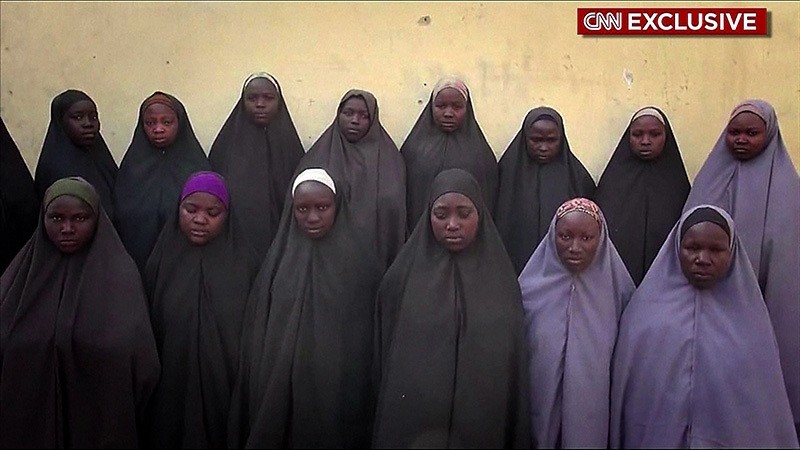 This video grab made on April 14, 2016 from a video obtained via a CNN footage that the Nigerian government has said is a ,proof of life, video being studied, that shows 15 of the more than 200 schoolgirls abducted by Boko Haram. (AFP Photo)
by Associated Press Oct 13, 2016 12:00 am

Twenty-one of Nigeria's Chibok schoolgirls kidnapped by Boko Haram more than two years ago have been freed in a swap for detained leaders of the terrorist group, the government and military said Thursday.

A total of 276 girls were taken on the night of 14 April 2014 but 57 of them later escaped. Another escaped this year. The latest releases leave at least 197 of the girls still in Boko Haram hands, although it is not known how many of them may have died.

The freed girls, the first to be released as a result of government action, are in the custody of the Department of State Services, Nigeria's secret intelligence agency, according to presidential spokesman Garba Shehu.

Their release was negotiated between the government and Boko Haram in talks brokered by the International Committee of the Red Cross and the Swiss government, he said. Negotiations will continue for the release of the other students, he said.

A military officer familiar with the talks said four detained Boko Haram leaders were released Wednesday night in Banki, a town on the northeast border with Cameroon. The officer spoke on condition of anonymity because he is not authorized to speak to the press on the matter. The girls were flown by helicopter to Maiduguri, the northeastern capital of Borno state and birthplace of Boko Haram, he said.

"We are extremely delighted and grateful," the Bring Back Our Girls movement said on Facebook. The group, which has campaigned within Nigeria and internationally for the release of the students, said it awaits the names of the released girls.

"We thank the federal government and, like Oliver Twist, we ask for more," said Professor Hauwa Biu, a woman activist in Maiduguri.

Negotiations last year failed when Boko Haram demanded a ransom of $5.2 billion for the girls' freedom, according to a recently published authorized biography of President Muhammadu Buhari by American historian John Paden. It was not clear if any money changed hands in this swap.

The abduction of 276 schoolgirls in April 2014 and the government's failure to quickly free them has caused international outrage and brought Boko Haram, Nigeria's home-grown extremist group, to the world's attention. Dozens of the girls escaped on their own, but most remain missing.

In May, one of the girls, Amina Ali Nkeki, escaped on her own. Shortly after her release Nkeki told her family that some of the kidnapped girls died of illness and that others, like her, have been married to fighters and are pregnant or already have babies, her mother told the press.

Since then Nkeki has been in the custody of the secret service where she is receiving medical care and trauma counseling, according to the government. Buhari's government has been criticized for keeping her isolated. The Bring Back Our Girls group and Human Rights Watch have asked whether Nkeki now is a detainee of the government.

Buhari recently said he was all for a quick release of the girls, including entering into negotiations with their abductors. He had invited the United Nations to consider mediating for the girls' freedom.

Abubakar Shekau, now a leader of a splinter group within the insurgency, repeatedly said he would free the girls only in exchange for his fighters locked in various government prisons, among other conditions.

Here's the timeline of events:

April 2014: Boko Haram extremists kidnap 276 schoolgirls from Chibok in northern Nigeria, the region where the insurgency emerged several years ago.

April 13, 2016: Boko Haram video appears to show some of the Chibok girls and tearful mothers recognize their daughters.

May 18, 2016: Relative says one of the Chibok girls is found, pregnant, in a forest; pressure grows on Nigeria's government to rescue the others.

Oct. 13, 2016: Spokesman for Nigeria's president confirms 21 Chibok girls have been freed, a result of government negotiations with Boko Haram.