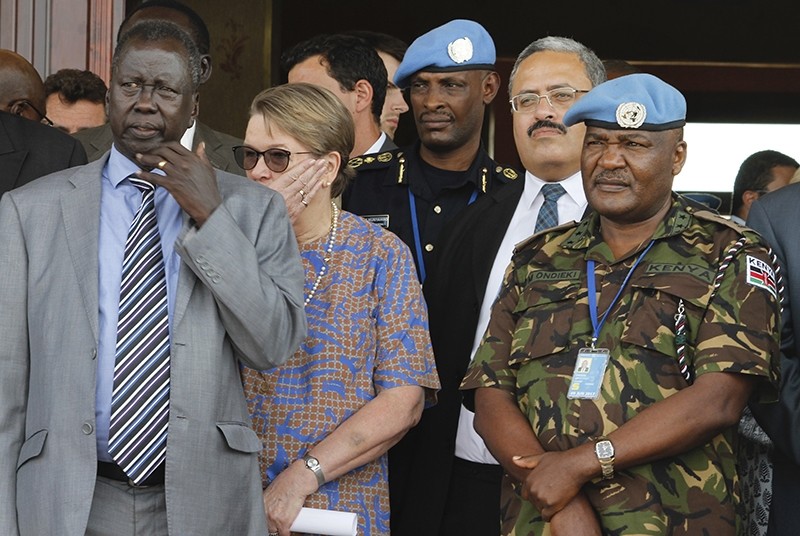 Kenya is pulling out its 1,000 troops deployed to South Sudan as part of the U.N. peacekeeping mission and stopping future deployments after the U.N. secretary-general fired the force's Kenyan commander, the foreign affairs ministry said Wednesday.

In a further blow to regional efforts to calm the civil war, Kenya said it is also disengaging from the South Sudan peace process, in which it has been instrumental as a broker, guarantor and monitor.

The firing of Kenyan Lt. Gen. Johnson Mogoa Kimani Ondieki came after an independent investigation sharply criticized peacekeepers' response to deadly attacks in July on a U.N. compound housing 27,000 displaced people in South Sudan's capital, Juba. The probe also found that peacekeepers didn't respond to calls for help as South Sudanese soldiers rampaged through a nearby compound popular with foreigners.

The firing was announced shortly after the investigators' report was released Tuesday.

Kenya has a little over 1,000 troops in the U.N. peacekeeping force in South Sudan, according to authorities. Kenya also had pledged to contribute troops for an additional 4,000 peacekeepers, whose deployment remains uncertain amid opposition from some South Sudan officials.

No more, Kenya's foreign ministry said Wednesday. A statement attributed to Principal Secretary Monica Juma said the process of firing Ondieki lacked transparency, without formal consultation with Kenya's government. It said the move "revealed a high degree of disrespect for our country."

The statement blamed the shortcomings of the peacekeeping force on the U.N.'s department of peacekeeping operations, saying the mission in South Sudan "suffers from fundamental structural and systemic dysfunctionality, which has severely hindered its ability to discharge its mandate."

Kenya also rejected the offer to nominate a replacement for Ondieki, the statement said.

A spokeswoman for the U.N. mission in South Sudan, Shantal Persuad, said the mission had not received any formal communication regarding Kenya's pullout. The spokesman for the U.N. secretary-general, Stephane Dujarric, said he had no information about the pullout.

Separately, a spokesman for South Sudan's opposition said Kenyan authorities had arrested a colleague for supporting the firing of the Kenyan commander in a post in social media. Mabior Garang said authorities were threatening to deport James Gatdet Dak, a spokesman for rebel leader Riek Machar.

"If they deport him, he will die," Mabior said, warning that South Sudan authorities will execute him on arrival.

South Sudan, the world's youngest country, has been riven by ethnic violence since shortly after gaining its independence from Sudan in 2011. Civil war broke out in 2013 when government forces loyal to President Salva Kiir, an ethnic Dinka, battled rebels led by his former vice president Machar, who is a Nuer. A peace agreement was signed in August 2015, but fighting continues. Tens of thousands have been killed and more than 2 million displaced.

In three days of fighting in South Sudan's capital in July, at least 73 people were killed, including more than 20 internally displaced people who had sought U.N. protection, said the U.N. report released Tuesday.

The report said "a lack of leadership on the part of key senior mission personnel culminated in a chaotic and ineffective response to the violence."

A confidential U.N. report obtained by The Associated Press in September said the deadly fighting in July was directed by the highest levels of Kiir's government.