Friends of All Africa Association opens stand at MÜSİAD Expo 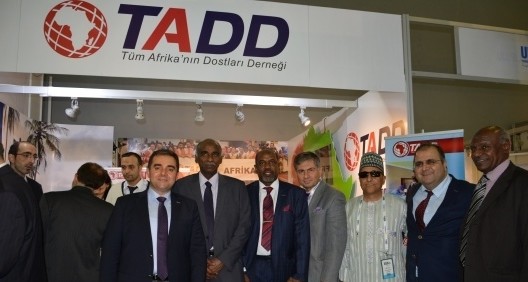 Friends of All Africa Association (TADD) opened a stand on Thursday in the Independent Industrialists' and Businessmen's Association's (MÜSİAD) 16th MÜSİAD EXPO at the Istanbul CNR Expo Center.

TADD helps Africa grow with education, health, water-well opening projects as well as meat distribution in the continent during the feast of sacrifice.

The association aims to reach more people with the MÜSİAD EXPO 2016.

Stating that MÜSİAD EXPO is a valuable organization, Dr. Bilgehan Gültekin, the head of TADD, said that the association is trying to create awareness regarding the problems Africa faces.

"We have founded our association in order to collaborate with African countries in education, health and economy. We are trying to promote Africa in Turkey and Turkey in Africa. We give scholarships and help students with internships," Gültekin said.

Deputy head of TADD, Dr. İbrahim Ulusoy also said that the association will continue its efforts until life standards of Africans are equal to that of Turkish citizens.

"So far, we have helped tens of thousands of people in Africa. We have also tried our best to help African students studying in Turkey with our education projects," he added.

Saying that TADD also continues projects on agriculture, watering and energy, he said "Taking President Recep Tayyip Erdoğan as a role model, we are helping our African brothers and sisters without exploiting them and their richnesses. We have started a solar powered water well project in Tanzania. Many water wells have been drilled so far, but none of them are solar powered, they are based on water pumps. We want to ease the process by bringing the water to the surface and bringing it to the doors of Africans," he said.

"We also plan to build schools, mosques and health centres alongside the water wells. We also have an educational project which aims to provide tablets to ease learning to help read and write," he concluded.

Thousands of businessmen from countries around the world have come together for three events hosted by the Independent Industrialists' and Businessmen's Association (MÜSİAD) at the 16th MÜSİAD EXPO at the Istanbul CNR Expo Center. The expo opened its doors to visitors with a ceremony attended by President Recep Tayyip Erdoğan.

Having been organized since 1993, the 16th MÜSİAD EXPO has taken Africa into focus which was also underlined by President Erdoğan during his speech. Erdoğan said members of MÜSİAD should take action with the Turkish government to rebuild African countries. Erdoğan said he will continue his visit to African countries with business delegations to urge them to partner up with African businesspeople.