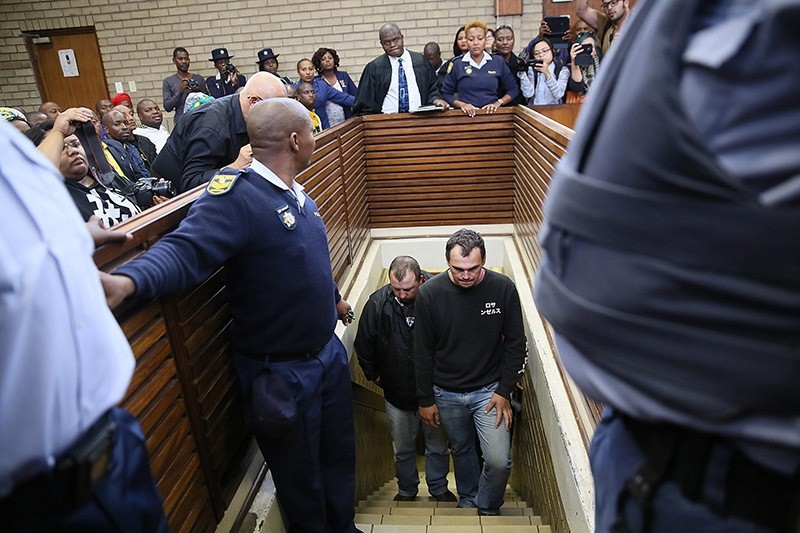 Theo Jackson (L) and Willem Oosthuizen (R), the two men who allegedly assaulted a black man and forcing him into a coffin, arrive during the first day of their trial, Middleburg, South Africa on November 16, 2016. (EPA Photo)
by French Press Agency - AFP
Nov 18, 2016 12:00 am

Two white South African farmers briefly appeared in court on Wednesday on assault charges after an online video emerged showing them pushing a black man into a coffin and threatening to burn him alive.

Willem Oosthuizen and Theo Martins Jackson, both 28, were remanded in custody after their lawyer decided not to apply for bail.

Magistrate Jongilizwe Dumehleli ordered the pair to return for another hearing on January 25.

The men face charges of kidnapping and assaulting 27-year-old Victor Mlotshwa over an incident that occurred in August at a farm near the town of Middelburg in the eastern province of Mpumalanga.

They were arrested on Monday after the video, apparently shot on a mobile phone by one of the two white men involved, went viral last week.

The 20-second clip shows one of the assailants shoving a black man, clearly in distress, into the wooden coffin and trying to force down the lid.

"Come, come. We want to throw the petrol on," said one of the men, speaking Afrikaans, according to the News24 website.

They are also accused of threatening to put a snake in the coffin.

Mlotshwa told ENCA television he was walking to the town of Middelburg and decided to use a short cut when the two men spotted him.

"I was in a hurry I had to use some path, a footpath, that was the shortest to go to Middelburg," he said.

"They accused me of trespassing. Then they beat me up and I had to run away," he said, adding he tried to flee but they caught him.

"They tied me with cable tie and took me to the nearest farm. They beat me up and forced me into the coffin."

'Drive them to the sea'

Political leaders who attended the trial used the event to highlight cases of racially motivated aggression around the country, telling their supporters to act against racism.

The Economic Freedom Fighters (EFF) opposition party and the ruling African National Congress held separate rallies outside the court to protest at the alleged assault and racism in South Africa.

"They want to torture our people when they are on our land."

At another rally, the spokesman of the radical EFF Mbuyiseni Ndlozi told party members that it is "impossible" for white South Africans to see blacks as fellow human beings or as equals.

"This country has a very painful past which still seems to be our present, in which black people continue to be treated like animals," he said.

"We are still in the same position we were under apartheid."

Despite its long history of institutionalised racism under the apartheid regime, South Africa does not have legislation that criminalises racism and it remains beset by deep-rooted inequality 22 years after the end of white-minority rule.

Cases of racism have erupted regularly on social media in recent years.

A South African estate agent was in June fined for labelling blacks as monkeys littering the beaches in a Facebook post she posted in January.

In August, a previously whites-only girls school was ordered to suspend allegedly racist hairstyle regulations after black pupils said they had been called monkeys by teachers for wearing banned "afros".

Early this year, the ANC acknowledged the need for a law that criminalises racism, given the country's "painful past".

The FW de Klerk Foundation said it "unreservedly" condemns the racial incident against Mlotshwa, calling it "dehumanising and humiliating".