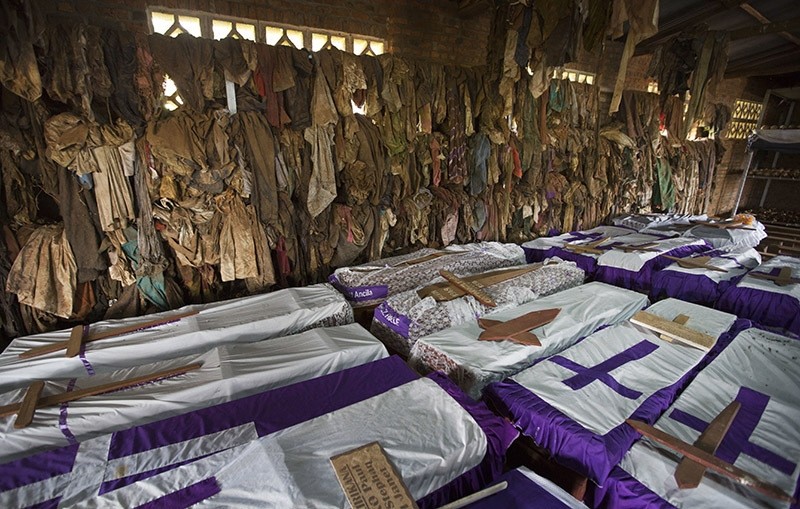 Clothes of some people slaughtered whilst seeking refuge inside the church hang above coffins containing the remains of victims killed in and around the Catholic church during the 1994 genocide in Ntarama, Rwanda. April 2014. (AP Photo)
by Associated Press
Nov 21, 2016 12:00 am

The Catholic Church in Rwanda apologized on Sunday for the church's role in the 1994 genocide, saying it regretted the actions of those who participated in the massacres.

"We apologize for all the wrongs the church committed. We apologize on behalf of all Christians for all forms of wrongs we committed. We regret that church members violated (their) oath of allegiance to God's commandments," said the statement by the Conference of Catholic Bishops, which was read out in parishes across the country.

The statement acknowledged that church members planned, aided and executed the genocide, in which over 800,000 ethnic Tutsis and moderate Hutus were killed by Hutu extremists.

In the years since the genocide — which was sparked by a contentious plane crash that killed the then-president, a Hutu — the local church had resisted efforts by the government and groups of survivors to acknowledge the church's complicity in mass murder, saying those church officials who committed crimes acted individually.

Many of the victims died at the hands of priests, clergymen and nuns, according to some accounts by survivors, and the Rwandan government says many died in the churches where they had sought refuge.

The bishops' statement is seen as a positive development in Rwanda's efforts at reconciliation. "Forgive us for the crime of hate in the country to the extent of also hating our colleagues because of their ethnicity. We didn't show that we are one family but instead killed each other," the statement said.

The statement was timed to coincide with the formal end Sunday of the Holy Year of Mercy declared by Pope Francis to encourage greater reconciliation and forgiveness in his church and in the world, said Bishop Phillipe Rukamba, spokesman for the Catholic Church in Rwanda.

Tom Ndahiro, a Rwandan genocide researcher, said he hoped the church's statement will encourage unity among Rwandans. "I am also happy to learn that in their statement, bishops apologize for not having been able to avert the genocide," he said.