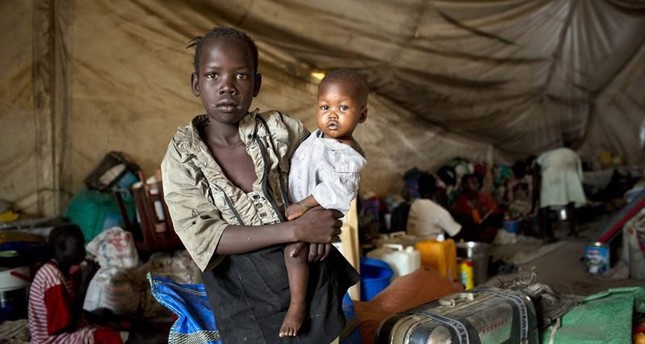 A young girl, displaced by fighting, holding her baby brother in a tent on the UN base in South Sudan, 30 March 2014. (EPA Photo)
Related Articles

A UN commission on human rights in South Sudan on Wednesday said ethnic cleansing was increasing around the war-torn country using massacres, starvation and gang rape.

Three commission members who had travelled around South Sudan for 10 days said they had observed deepening ethnic divisions in the country with 64 ethnic groups.

"There is already a steady process of ethnic cleansing under way in several areas of South Sudan using starvation, gang rape and the burning of villages," team leader Yasmin Sooka said.

"Everywhere we went across this country, we heard villagers saying they are ready to shed blood to get their land back" after it was taken from them, Sooka said.

"Many told us it's already reached a point of no return," she added.

The ethnic cleansing forms part of fighting between government, rebel troops and allied militias in the country where a political split between President Salva Kiir and his former deputy Riek Machar escalated into a military conflict in December 2013.

The conflict, which has killed tens of thousands and displaced 3 million people, has pitted Kiir's Dinka ethnic group against Machar's Nuers and others suspected of supporting the rebels.

Adama Dieng, UN special advisor on the prevention of genocide, has called on the UN Security Council to impose an arms embargo to prevent South Sudan's ethnic violence from escalating into genocide.

The ethnic attacks have spread even to the southern Equatoria region, which had not experienced much violence until now, he said.

The UN humanitarian coordinator for South Sudan meanwhile said he was "deeply concerned" about bureaucratic impediments and access constraints to humanitarian agencies trying to assist people in need.

The statement said 91 such incidents had been recorded in November alone.

"Humanitarian organizations in South Sudan are striving every day to save lives and alleviate suffering across this country," humanitarian coordinator Eugene Owusu said. "Yet, they continue to face obstacles and challenges which hamper their efforts."

Share on Facebook Share on Twitter
Previous in Africa Rwanda on Tuesday opened a formal probe into 20 French officials suspected... Next in Africa The last buildings occupied by Daesh militants in Sirte have fallen...
DAILY SABAH RECOMMENDS