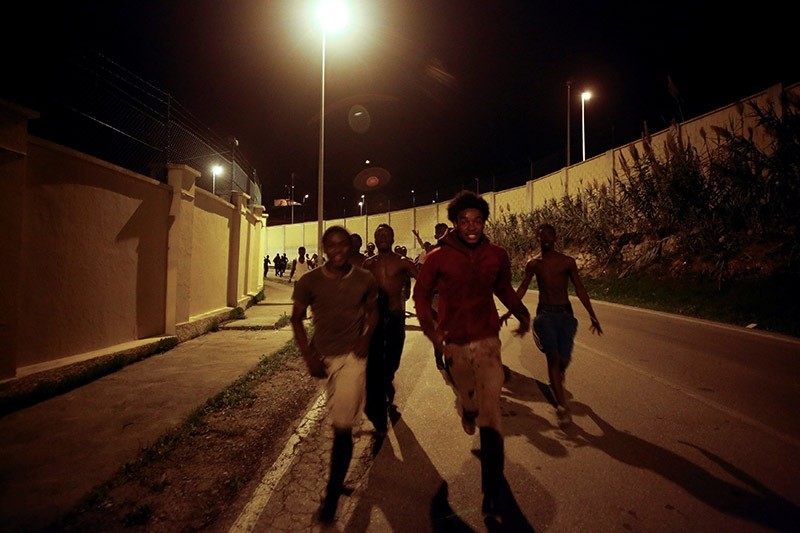 African migrants run on a road after crossing the border fence between Morocco and Spain's north African enclave of Ceuta, December 9, 2016. (Reuters Photo)
by Compiled from Wire Services Dec 09, 2016 12:00 am

The Spanish Interior Ministry says some 400 migrants from Africa have stormed a border fence to enter Spain's North African enclave of Ceuta from Morocco.

A ministry official in the city said two police officers and three migrants suffered cuts and bruises in the early morning crossing Friday.

Ceuta along with Melilla, another Spanish territory in North Africa, have the European Union's only land borders with Africa.

They are favored entry points for African migrants seeking a better life in Europe, who get there by either climbing over the border fence or by swimming along the coast.

In 2014, 15 migrants drowned as dozens tried to swim to Ceuta from a nearby beach.

At the time, human rights groups and migrants said Spanish police tried to keep them from reaching the shore by firing rubber bullets and spraying them with tear gas.

Some also try to cross from Morocco into mainland southern Spain by boat, despite tighter controls in recent years by the two countries which has diminished the number of those attempting this route.

Four African migrants drowned and 34 were rescued on Wednesday off the coast of Morocco when their boat sank, though it was unclear whether they were heading to Spain or to one of the two Spanish North African enclaves.

Libya has become a more common departure point for African migrants, most from sub-Saharan countries, who attempt the crossing to Italy.