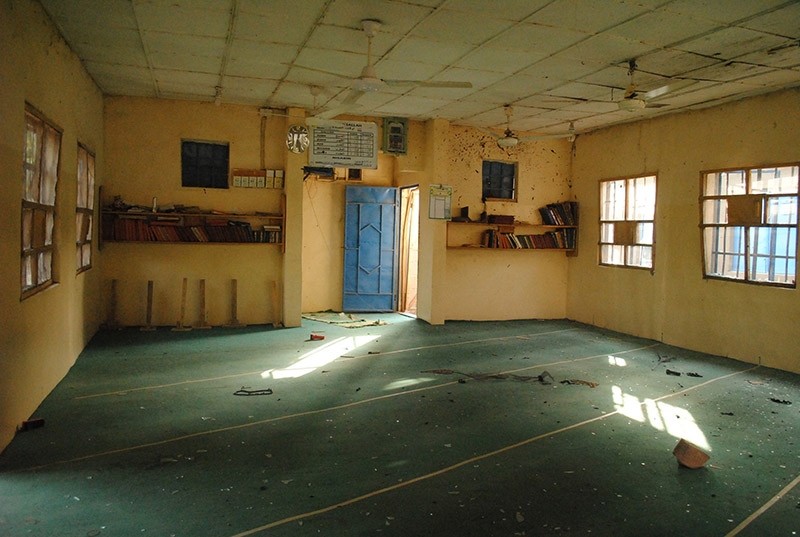 Broken glasses and other materials are scattered on the floor of a room in a building where a bomb exploded at Nigeria's northeastern University of Maiduguri in Maiduguri, Nigeria, Monday, Jan. 16, 2016. (AP Photo)
by Compiled from Wire Services Jan 16, 2017 12:00 am

Four people including a professor of veterinary medicine, a teenager and two suicide bombers have been confirmed dead in twin bomb explosions at a major university in the restive Nigeria's Maiduguri city early Monday morning.

Spokesman of the national emergency management agency, Sani Datti confirmed the casualties in a statement, saying "there was a reported incidence of twin blasts at the University of Maiduguri at about 5a.m. (local time).

"A total of four people, including two suicide bombers, have been confirmed dead, and 17 injured victims were transferred to hospital," he said.

Also, the university spokesman, Ahmed Mohammed told Anadolu Agency in Maiduguri that a professor of veterinary medicine, Abubakar Mani, and a teenager were among the casualties. 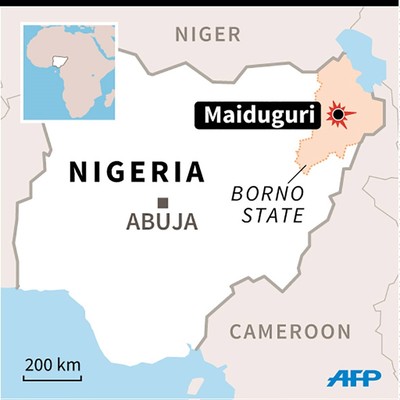 Police said the explosions occurred within the premises of the University of Maiduguri, a major university in the country's northeast region, as Muslims were observing their early morning prayers.

"There was an explosion within the premises of University of Maiduguri during the early morning prayers by Muslim faithful," Borno police spokesman, Victor Isuku said in a short statement. Isuku added that before the blast at the mosque, police on patrol shot a girl aged about 12 as she tried to get into the university at about 5:15 am (0415 GMT).

"The IED (improvised explosive device) strapped to her body exploded, killing her instantly," he said in a statement.

"Shortly after that a second explosion occurred in a mosque inside the university. Four persons, including a professor and the second suicide bomber, died, while 15 persons sustained various degrees of injuries and were rushed to UMTH (University of Maiduguri Teaching Hospital)."

A senior official of the University who is not authorized to speak on the incident said the first blast occurred at "a mosque near the Gate 5 of the University killing some worshippers including a professor and injuring many."

"The second happened near Gate 1, a designated bus stop for students and other members of the University community. But there was no casualty there because transport activities were yet to resume as it was very early," the source said.

The blast happened at a mosque in the staff quarters area of the University of Maiduguri and is thought to have been carried out by a teenage girl, a local resident and a lecturer told AFP.

One local resident, who asked not to be identified, said he heard two explosions at 5:25 am as he was leaving the mosque in his neighborhood.

"I rushed to the university, which is not far from my house. On entering, I saw the mosque in a mess. Three people lay dead, including a young girl, whose body was badly mutilated," he said.

"Thirteen other worshippers were injured."

A university lecturer who lives on site confirmed the resident's account.

Access to the university campus has been strictly controlled, with checkpoints and searches at the gates.

But the site, on one of the main thoroughfares leading in to and out of the city, is vast and most areas are badly lit.

Nobody has claimed responsibility for the bomb explosions but military sources said they bore the hallmark of Boko Haram insurgents who have stepped up suicide bombing in the area since 2014.

The incident was the first bomb blast recorded in the 43-year-old university during the nearly seven years of Boko Haram insurgency in the area.

At least 20,000 people have been killed in the conflict since it began in 2009 and more than 2.6 million others made homeless.

Nigeria maintains the insurgency is in its final stages.

Last month said it had flushed out Boko Haram fighters from their stronghold in the Sambisa Forest area of Borno state, of which Maiduguri is the capital.

Yet there has been no let-up in attacks both on troops and civilians. On January 8, at least five soldiers were killed when rebels targeted a base in Buni Yadi, in neighboring Yobe state.