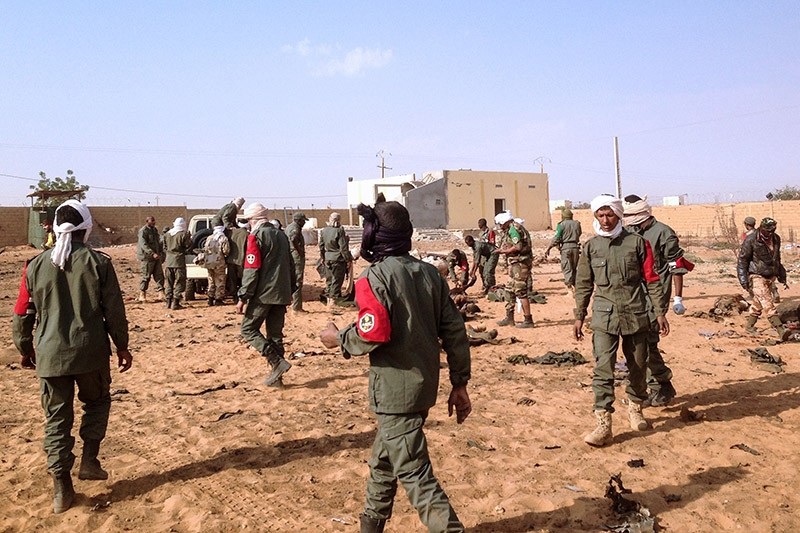 Soldiers attend to wounded and casualties in Mali, in the aftermath of a suicide bomb attack who ripped through a camp grouping former rebels and pro-government militia. Jan. 18, 2017. (AFP Photo)
by Anadolu Agency Jan 18, 2017 12:00 am

The death toll from a suicide attack that targeted a military base in Mali's northern city of Gao has risen to 60, along with 115 injured, the country's president has said.

"We will rise from every blow … we will win, you will be defeated," President Ibrahim Boubacar Keita said late Wednesday in a televised speech.

The suicide attack took place Wednesday morning when an explosives-laden car was driven to the camp of the Operational Coordination Mechanism (MOC) in Gao at 9 a.m. local time (0900GMT).

Five suicide bombers who were in the car also died in the attack, according to a statement from the Malian government.

The president also declared a three-day period of national mourning.

It is active in northern Mali and Africa's Sahel region. Al-Mourabitoun is led by Mokhtar Belmokhtar, an Algerian.

The group has claimed responsibility for several attacks and kidnappings in the region, including a hotel siege in Burkina Faso in January 2016 that led to the death of at least 28 people.

Eighteen nationalities were among the dead, including people from France, Switzerland, the U.S., and Canada.

It also claimed responsibility for a 2013 hostage-taking incident at a gas plant in southeastern Algeria and the attack on Byblos Hotel in Sevare, central Mali in August 2015 that killed 17 people.

The group is among a number of militant organizations active in northern Mali, where French, Malian, and UN peace troops are conducting counterterrorism operations. Militants captured northern Mali in 2012.