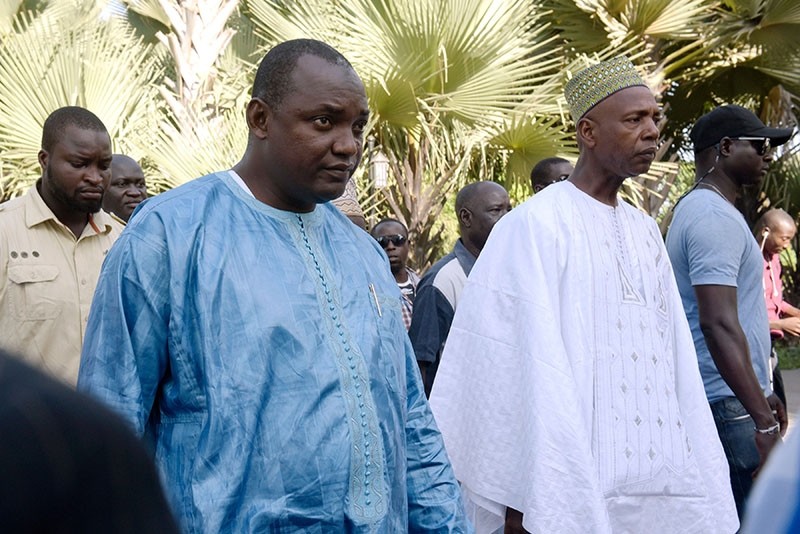 This file photo taken on December 13, 2016 shows Gambian president-elect Adama Barrow, flanked by his supporters, arriving at a luxury hotel in Banjul. (AFP Photo)
by Compiled from Wire Services Jan 19, 2017 12:00 am

Adama Barrow will be sworn in as Gambian president Thursday at his country's embassy in the Senegalese capital Dakar, the president-elect announced.

"The General Public is hereby invited!!", he said on Facebook.

Barrow had earlier been expected to travel to Gambia for his inauguration, which the constitution mandated to take place on Thursday, but the ceremony was jeopardized by outgoing President Yahya Jammeh's refusal to give up power after losing the December 1 election.

Chief of Defence Staff General Ousman Badgie and Inspector General of Police Ousman Sonko stopped taking commands from Jammeh at midnight, when his time in office officially ended after 22 years, the intelligence officer told dpa on condition of anonymity.

Both chiefs had previously pledged loyalty to Jammeh.

Barrow won the December election, defeating Jammeh, who came to power in a coup in 1994. Jammeh initially conceded defeat but then changed his mind and said he would not accept the results, saying the election was marred by irregularities.

Gambian president-elect Adama Barrow will be sworn in at his country's embassy in the Senegalese capital Dakarhttps://t.co/S1jHaeHiOe pic.twitter.com/qs5kReLWQN

Jammeh has resisted strong international pressure for him to step down and allow Barrow to take office and allow a peaceful resolution to Gambia's crisis. His mandate expired at midnight, and troops from Senegal and other West African countries have positioned themselves on Gambia's border with the intention of forcing Jammeh out if he doesn't agree to leave.

Experts don't believe Jammeh would be able to hold up a military battle for long. The country of 1.9 million people has about 1,000 soldiers, little capacity to fight a well-trained army, for example that of Senegal, which has almost 20,000 troops.

In a last-minute effort to find a diplomatic resolution, Mauritania President Mohamed Ould Abdel Aziz flew to Gambia's capital, Banjul, and met with Jammeh on Wednesday night before traveling to Senegal to meet with Barrow and Senegal President Macky Sall. However, no resolution was announced by Thursday morning, and Jammeh made no public statements.

It was not clear where Jammeh was Thursday.

The streets of Banjul were quiet on Thursday, with few cars and scattered groups of men gathered on roadsides chatting under trees.

Jammeh declared a state of emergency this week, but there were no signs of military activity and fewer checkpoints than in previous days.

Thousands of Gambians have fled the country, including some former cabinet members who resigned in recent days. Hundreds of foreign tourists, including many from Britain and the Netherlands, were evacuated on special charter flights.