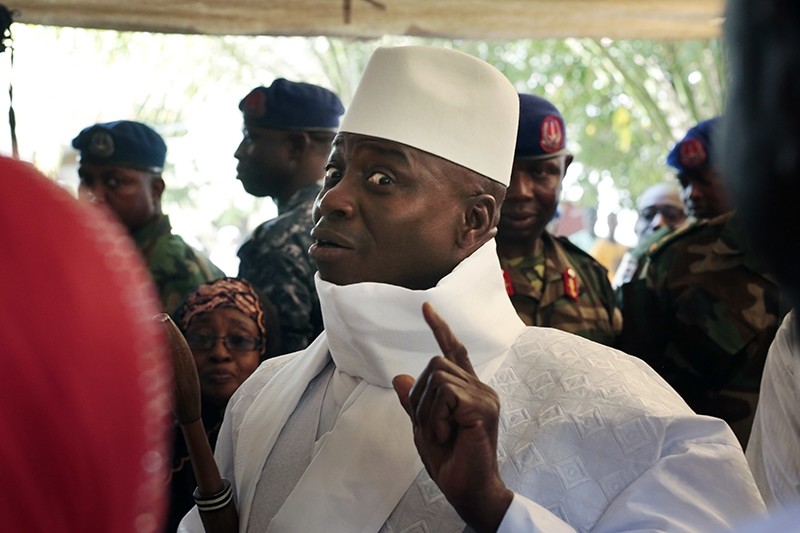 Gambia's President Yahya Jammeh shows his inked finger before voting in Banjul, Gambia. (AP Photo)
by Compiled from Wire Services Jan 20, 2017 12:00 am
Gambia's longtime leader Yahya Jammeh, who lost a December election but refused to recognise the result, has agreed to step down and go into exile, a close advisor to new President Adama Barrow said.

Mai Ahmad Fatty was shown a tweet from a Twitter account purported to belong to Barrow stating that Jammeh had agreed to the deal and was asked if it was authentic. "That is correct," he said.

Adama Barrow, who was elected president last month, was sworn in Thursday, and the U.N. Security Council voted unanimously to approve the regional military intervention. The inauguration took place at the Gambian Embassy in neighboring Senegal for Barrow's safety.

Defense forces chief Ousmane Badjie said that Gambia's security services all support Barrow and would not fight the regional force that was poised to push out Jammeh if talks failed.

With his security forces abandoning him and his Cabinet dissolved, Jammeh was increasingly isolated as the last-minute talks continued at his official residence in the capital, Banjul, with the leaders of Guinea and Mauritania.

The regional force included troops from Senegal, Ghana, Nigeria, Togo and Mali, and they moved in after Barrow's inauguration and the U.N. vote.

Guinean President Alpha Conde arrived in Banjul with Mauritanian President Mohamed Ould Abdel Aziz. Mauritania has been mentioned as a possible home in exile for Jammeh. After a first round of talks, they broke for Friday prayers and resumed.

Conde will offer Jammeh the chance to step down peacefully, de Souza said.

Jammeh "has the choice of going with President Alpha Conde," he said, but if that fails, "we will bring him by force or by will."

He had agreed to step down but demanded amnesty for any crimes he may have committed during his 22 years in power and wanted to stay in Gambia, in his home village of Kanilai, de Souza said. Those demands are not acceptable to ECOWAS, he added.

At a news conference in Nouakchott before leaving for Gambia, Abdel Aziz said he would "never understand" why Jammeh backed off from his initial pledge to accept defeat and step down, Mauritanian state media reported.

In his inaugural speech, which took place under heavy security, Barrow urged Jammeh to respect the will of the people and step aside. He also called for Gambia's armed forces to stay in their barracks.

Some of Gambia's diplomatic missions have begun switching their allegiance.

"We embrace and support the new president Adama Barrow," said Almamy Kassama, an official at the Gambian mission to the African Union in Addis Ababa, Ethiopia, in an email.

The U.S. supported the regional force's intervention and was in touch with officials in Senegal, said State Department spokesman John Kirby, adding that he didn't have tactical information, but "obviously, it's very, very tense."

"I think the Gambian military would know it's outnumbered," said Maggie Dwyer, an expert on West African armed forces at the University of Edinburgh. "Gambia's military has very little combat experience. This would be a very difficult situation for them."

She estimated it had 2,400 troops at most, plus fewer than 1,000 paramilitary forces.

"My guess is a very small number would actually put their life on the line for Jammeh," though some could stand by him to get the same deal he might receive to avoid prosecution, Dwyer said.

Soldiers at checkpoints in Banjul appeared relaxed, with one telling visitors, "Welcome to the smiling coast."

Other nations have begun stepping away from Jammeh, with the African Union saying the continental body no longer recognizes him.

About 45,000 people have fled Gambia for Senegal, fearing violence, according to the Senegalese government and the U.N. refugee agency. About two-thirds are children accompanied by women, the U.N. said.

Only about a few thousand international tourists are believed to still be in Gambia, and efforts continued to evacuate them.