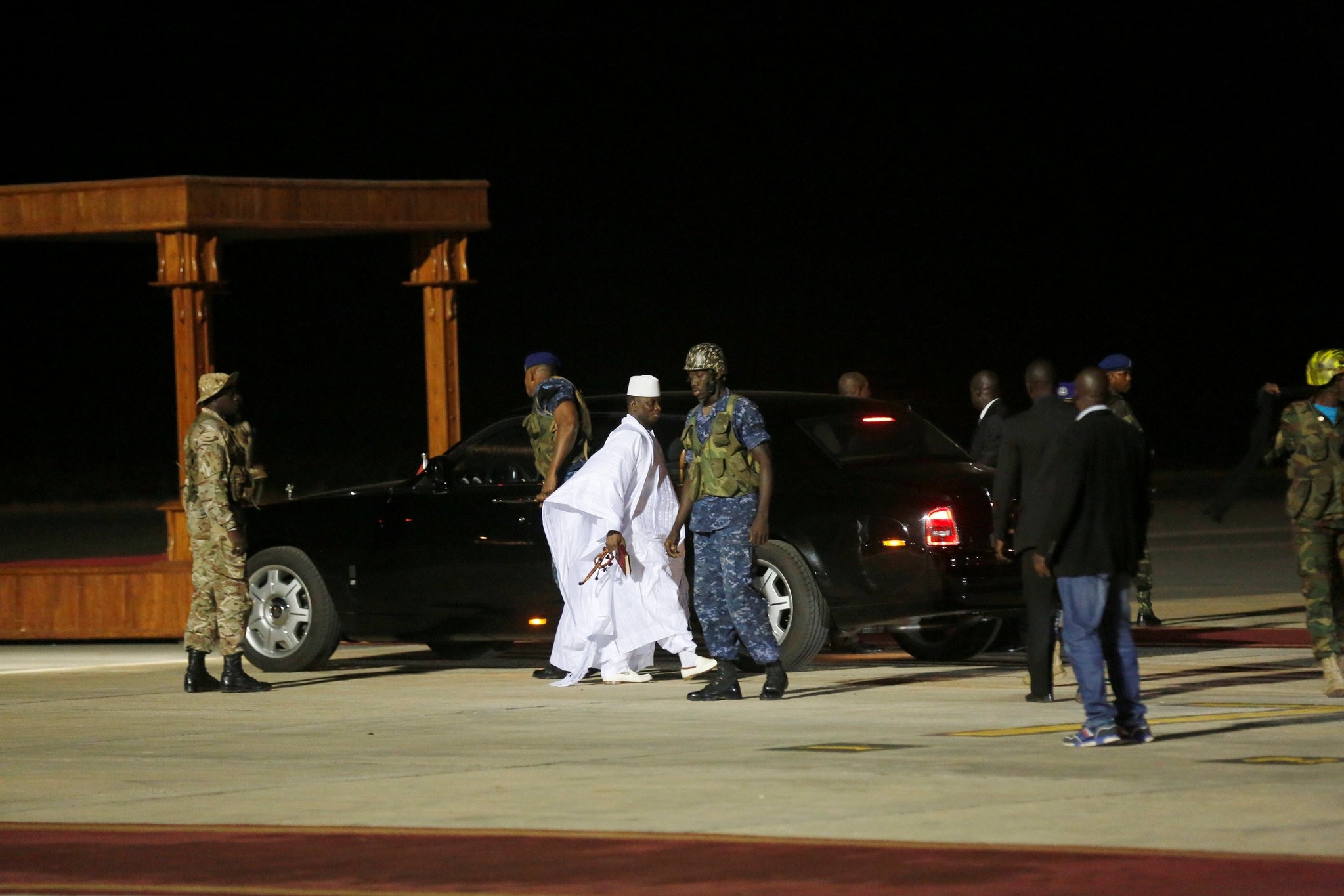 Gambia's defeated leader Yahya Jammeh and his family headed into political exile Saturday night, ending a 22-year reign of fear and a post-election political standoff that threatened to provoke a regional military intervention when he clung to power.

As he mounted the stairs to the plane, he turned to the crowd, kissed his Quran and waved one last time to supporters, including soldiers who cried at his departure.

The flight came almost 24 hours after he announced on state television he was ceding power in response to mounting international pressure calling for his ouster. The incoming president, Adama Barrow, told The Associated Press earlier Saturday that Jammeh would fly to Guinea, though that might not be his final destination.

Though tens of thousands of Gambians had fled the country during his rule, Jammeh supporters flocked to the airport to see him walk the red carpet to his plane. Women shouted: "Don't go! Don't go!"

Barrow defeated Jammeh in the December elections, but Jammeh contested the results as calls grew for him to be prosecuted for alleged abuses during his time in power. A regional force had been poised to force out Jammeh if last-ditch diplomatic efforts failed to persuade him to leave.

The situation became so tense that Barrow had to be inaugurated in neighboring Senegal at the Gambian Embassy. He said Saturday he would return to Gambia once it is "clear" and a security sweep is completed.

Barrow told the AP he had not yet been given the communique that should spell out the terms of Jammeh's departure. "What is fundamental here is he will live in a foreign country as of now," he said.

In the Guinean capital, Conakry, the security minister was at the airport with jeeps full of well-armed military personnel, witnesses said. However, a special plane also landed from Malabo, the capital of Equatorial Guinea, with only a crew and no passengers, suggesting that could be Jammeh's final destination. Equatorial Guinea, unlike Guinea, is not a state party to the International Criminal Court.

Jammeh, who seized power in a coup in 1994, once vowed to rule for a billion years. His departure has brought an end to the political crisis in this nation of 1.9 million, which has promoted itself to European tourists as "the Smiling Coast of Africa."

As Jammeh prepared to leave the country after hours of last-minute negotiations with the leaders of Guinea and Mauritania, human rights activists demanded that he be held accountable for alleged abuses, including torture and detention of opponents.

"Jammeh came as a pauper bearing guns. He should leave as a disrobed despot. The properties he seeks to protect belong to Gambians and Gambia, and he must not be allowed to take them with him. He must leave our country without conditionalities," said Jeggan Bahoum of the Movement for the Restoration of Democracy in Gambia.

An online petition urged that Jammeh not be granted asylum and should instead be arrested. Barrow, though, cautioned that was premature.

"We aren't talking about prosecution here, we are talking about getting a truth and reconciliation commission," Barrow told the AP. "Before you can act, you have to get the truth, to get the facts together."

In recent days, Jammeh had been holed up in his official residence in Banjul, increasingly isolated as he was abandoned by his security forces and several Cabinet members.

The West African regional bloc, ECOWAS, had pledged to remove Jammeh by force if he did not step down. The group assembled a multinational military force that rolled into Gambia on Thursday, after Barrow's inauguration and a unanimous vote by the U.N. Security Council supporting the regional efforts.

"For the Gambia to truly move on, President Barrow must reside in State House and begin the task of governing. In an ideal scenario, Jammeh will also face justice for the many crimes he has committed since 1994," Smith wrote by email.