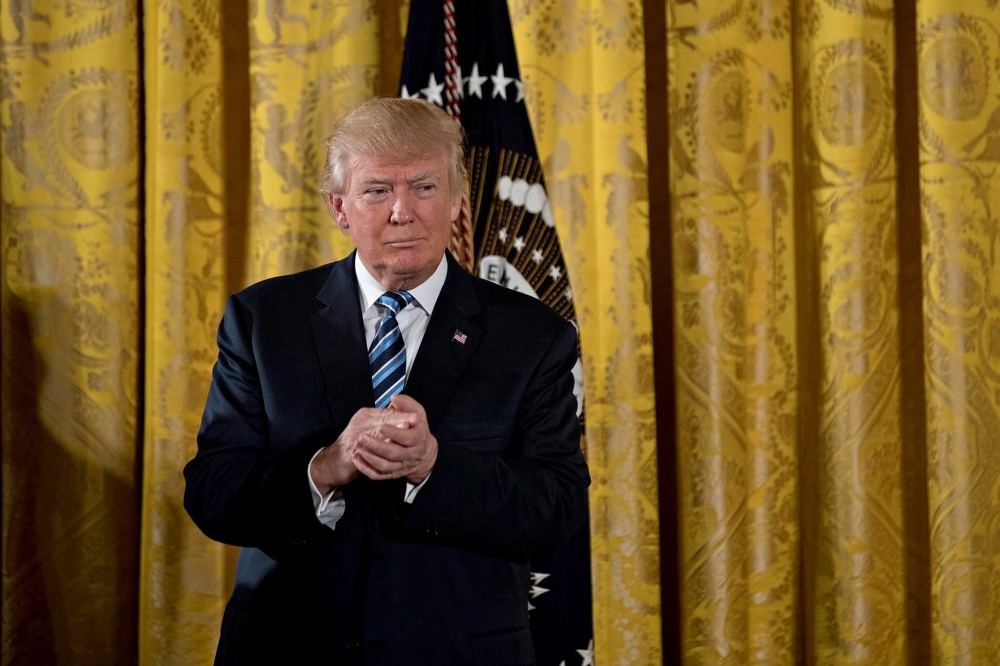 U.S. President Donald Trump listens during a swearing in ceremony of White House senior staff in the East Room of the White House in Washington, DC, U.S., on Jan. 22.
by daily sabah
Jan 24, 2017 12:00 am

Regarding U.S. foreign policy, President Trump has mentioned Europe, Asia, Central America, and the Middle East but has barely mentioned sub-Saharan Africa. A document submitted to the Department of State by the Trump team holds some clues

Trump has talked about Europe, Asia, Central America, and the Middle East but has barely mentioned sub-Saharan Africa. In the unclassified four-page document submitted to the Department of State by the Trump Team, obtained by the New York Times, questions about aid, business, counter-terrorism operations and epidemics are being raised and hint to a change in U.S. foreign policy regarding the continent.

George W. Bush quadrupled aid to Africa during his presidency and Barack Obama kept it largely the same even if he cut costs from domestic American programs.

The federal budget for foreign aid is 1 percent, $5.5 billion for Afghanistan, $3.1 billion for Israel, $.1.8 billion for Iraq and $1.4 billion for Egypt. In contrast Sub-Saharan African countries as a whole get $8.8 billion.

The paper poses the question: "With so much corruption in Africa, how much of our funding is stolen? Why should we spend these funds on Africa when we are suffering here in the U.S.?"

The PEPFAR program fights diseases such as AIDS and Tuberculosis. It has been praised by Trump's Secretary of State, Rex Tillerson, who, during his Senate nomination hearing, said it is "one of the most extraordinarily successful programs in Africa." The questionnaire does however inquire as to whether it is worth it or not. "Is PEPFAR worth the massive investment when there are so many security concerns in Africa? Is PEPFAR becoming a massive, international entitlement program?" the paper asks.

Another question, focused on the African Growth and Opportunity Act (AGOA) trade agreement:

"Most of AGOA imports are petroleum products, with the benefits going to national oil companies, why do we support that massive benefit to corrupt regimes?"

J. Peter Pham, director of the African program at the Atlantic Council, who was mentioned for the position of assistant Secretary of State for African affairs stated he is not worried about Trump's African policy and doesn't expect and radical changes either. "AGOA has created more than 120,000 jobs in the United States"

Much like the Middle East, Africa is riddled with various terrorist organizations. From al-Shabaab to Boko Haram, the document inquires as to what is actually being achieved to fight the extremist groups. Why, for example, wasn't there some operation against Boko Haram to rescue the kidnapped schoolgirls from Nigeria?

And regarding Somalia, which is also riddled with piracy and hinders international trade in the region: "We've been fighting al-Shabaab for a decade, why haven't we won?"

President Trump has pledged on numerous occasions, including his inaugural address on Friday, to completely eradicate "radical terrorism." One would think he was talking about the problems of the Middle East, specifically Daesh, but what of its sister groups in Africa?

What of Joseph Kony? "We've been hunting Kony for years, is it worth the effort?" The leader of the "Lord's Resistance Army" has evaded authorities for three decades. U.S. Army general Carter F Ham of the U.S. Africa Command stated in 2012 "There's a little bit of what I call the 'man on the moon' effort here, that the U.S., you're able to put a man on the moon. What do you mean you can't find this guy, wandering around in Central Africa? But it is very, very complex."

The group has been largely eradicated and numbers 300-400 members as of 2011 according to the Institute for National Strategic Studies and the roughly 100 American soldiers stationed in Uganda rarely leave their base and are there essentially to provide advice and intelligence.

"How does U.S. business compete with other nations in Africa? Are we losing out to the Chinese?" China has made a reputation in the past few years to expand hugely into sub-Saharan Africa and in 2009 became the continent's biggest trading partner.

"China is moving relentlessly across Africa… locking down strategic natural resources, locking up emerging markets, and locking out the United States." Writes Peter Navaro in his 2011 book "Death by China."

Even so the U.S. ranks first regarding direct foreign investment to African nations, with China coming in seventh. American businesses also have the upper hand in Africa due to the AGOA.