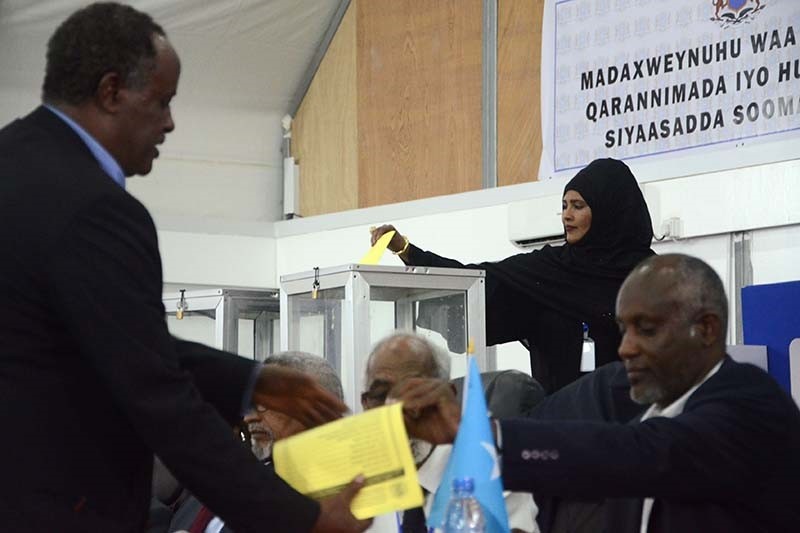 "History was made, we have taken this path to democracy, and now I want to congratulate Mohamed Abdullahi Farmajo," Mohamud said.

This Horn of Africa nation is trying to put together its first fully functioning central government in a quarter-century. Years of warlord-led conflict and al-Shabab terrorist attacks, along with famine, have left this country of about 12 million people largely shattered.

Members of the upper and lower houses of the legislature dropped their ballots into clear boxes at the heavily guarded election venue, a former air force base in the capital, Mogadishu. Fears al-Shabab attacks limited the election to the lawmakers instead of the population at large. The voting was being streamed online .

Across Mogadishu, Somalis gathered around TV screens at cafes and homes, eagerly watching the vote.

"I hope they will not choose bribes over the interest of the people." said Ahmed Hassan, a 26-year-old university student, who sat with dozens of men in front of a large television screen. "We need an honest leader who can help us move forward."

Alinur Muhummed, 36, a laborer, criticized the legislators. "They don't have any sense of patriotism or nationalism. I don't believe they will elect a president ... according to his national plan but rather the bribes he paid them ... It'll take time for Somalia to stand on its feet again."

Somalia's instability landed it among the seven Muslim-majority countries affected by President Donald Trump's executive order on immigration, even though its government has been an increasingly important partner for the U.S. military on counterterrorism efforts, including drone strikes against al-Shabab leaders.

In a sign of the dangers that remain in Mogadishu, two mortar rounds fired by suspected extremists late Tuesday hit near the election venue. There were no public statements by al-Shabab on Wednesday.

While the international community has pushed Somalia to hold this election as a symbol of strength, including the U.S. pouring in hundreds of millions of dollars in recent years for political and economic recovery, the vote has been marred by reports of widespread corruption.

The legislators voting — 275 members of the lower legislative house and 54 senators — were selected by the country's powerful, intricate network of clans. Weeks ago, a joint statement by the United Nations, the U.S., European Union and others warned of "egregious cases of abuse of the electoral process."

Examples included violence, intimidation and men taking seats that had been reserved for female candidates, the joint statement said.

With reports of votes being sold for up to $30,000 apiece, "This is probably the most expensive election, per vote, in history," the Mogadishu-based anti-corruption group Marqaati said in a report released Tuesday.