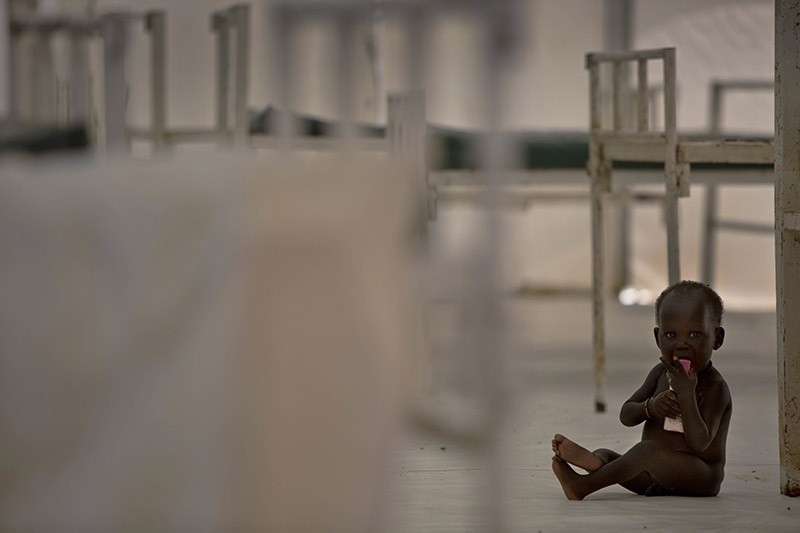 In this photo taken on Oct. 23, 2016, a young child sits on the floor in the therapeutic feeding unit of the Medecins Sans Frontieres hospital in the UN Protection of Civilians Camp in Bentiu, South Sudan. (AP Photo)
by Compiled from Wire Services Feb 20, 2017 12:00 am

Famine has been declared in two counties of South Sudan, according to an announcement by the South Sudan government and three U.N. agencies, which says the calamity is the result of prolonged civil war and an entrenched economic crisis that has devastated the war-torn East African nation.

The official classification of famine highlights the human suffering caused by South Sudan's three-year civil war and even as it is declared President Salva Kiir's government is blocking food aid to some areas, according to U.N. officials.

More than 100,000 people in two counties of Unity state are experiencing famine and there are fears that the famine will spread as an additional 1 million South Sudanese are on the brink of starvation, said the announcement.

"Our worst fears have been realized," said Serge Tissot, head of the Food and Agriculture Organization in South Sudan. He said the war has disrupted the otherwise fertile country, causing civilians to rely on "whatever plants they can find and fish they can catch."

Roughly 5.5 million people, or about 50 percent of South Sudan's population, are expected to be severely food insecure and at risk of death in the coming months, said the report. It added that nearly three-quarters of all households in the country suffer from inadequate food.

If food aid does not reach children urgently "many of them will die," said Jeremy Hopkins, head of the U.N children's agency in South Sudan. Over 250,000 children are severely malnourished Hopkins said, meaning they are at risk of death.

"A formal famine declaration means people have already started dying of hunger. The situation is the worst hunger catastrophe since fighting erupted more than three years ago," said the statement signed by the World Food Programme (WFP), UN children's agency UNICEF and the Food and Agricultural Organisation (FAO).

"This famine is man-made,"said Joyce Luma, head of the World Food Program in South Sudan. "There is only so much that humanitarian assistance can achieve in the absence of meaningful peace and security."

It is not the first time South Sudan has experienced starvation. When it fought for independence from Sudan in 1998, the territory suffered from a famine spurred by civil war. Anywhere from 70,000 to several hundred thousand people died during that famine.

South Sudan, the world's youngest nation, was engulfed by civil war in 2013 after President Salva Kiir accused his rival and former deputy Riek Machar of plotting a coup against him.

An August 2015 peace deal was left in tatters when fighting broke out in Juba in July last year.

Violence -- initially between ethnic Dinka supporters of Kiir and ethnic Nuer supporters of Machar -- has since spread to other parts of the country, engulfing other ethnic groups and grievances.

The United Nations has warned of potential genocide and ethnic cleansing, and there is no prospect of peace in sight.