Almost $1 billion worth of Turkish aid sent to Somalia 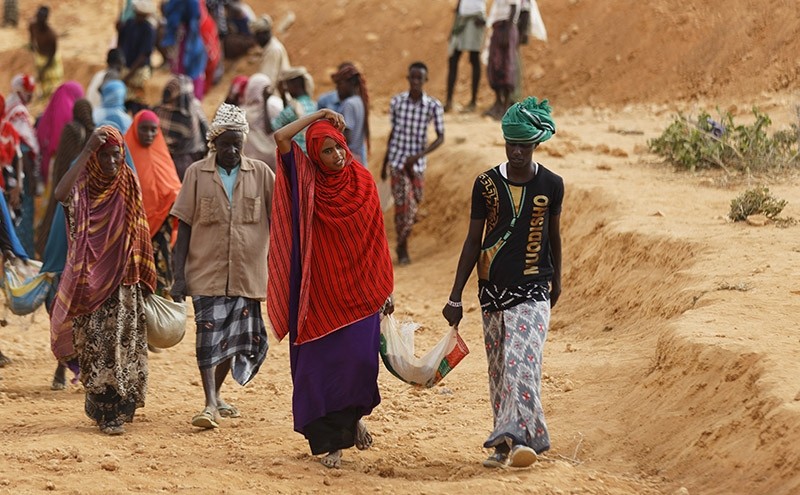 In this photo taken March 8, 2017, women and men carry away earth after digging to build a dam so that if rains do come the water can be stored near Bandar Beyla in Somalia's semiautonomous northeastern state of Puntland. (AP Photo)
by Anadolu Agency Mar 19, 2017 12:00 am

Turkish deputy prime minister said Saturday Turkey has sent almost $1 billion worth of aid to Somalia since 2011 as part of the country's Africa strategy.

Şimşek said one of the agenda items of G20 was to strengthen dialogue with African countries, "because the next 100 years will be the [years] of Africa."

"So what is Asia today in terms of global economy; If Asia is the biggest engine of the global economy today, there is the possibility for Africa in the future.

"Turkey is already making an enormous effort towards Africa. We have a strategy. So we had 12 embassies in 2004 and now there are 39," he said.

Turkish minister also stated that the two-day meeting in Baden-Baden was a "fruitful" for Turkey to express itself to the investors.

"We tried to remove the question marks in the minds of those who have investments in Turkey and those who are considering to invest," he said.

The meetings provided a preliminary discussion platform ahead the G20 Summit of heads of state and government, which will be held in Hamburg on July 7-8, 2017.

G20 finance ministers and central bank governors will also gather at the International Monetary Fund's spring and annual meetings in April and October in Washington DC.