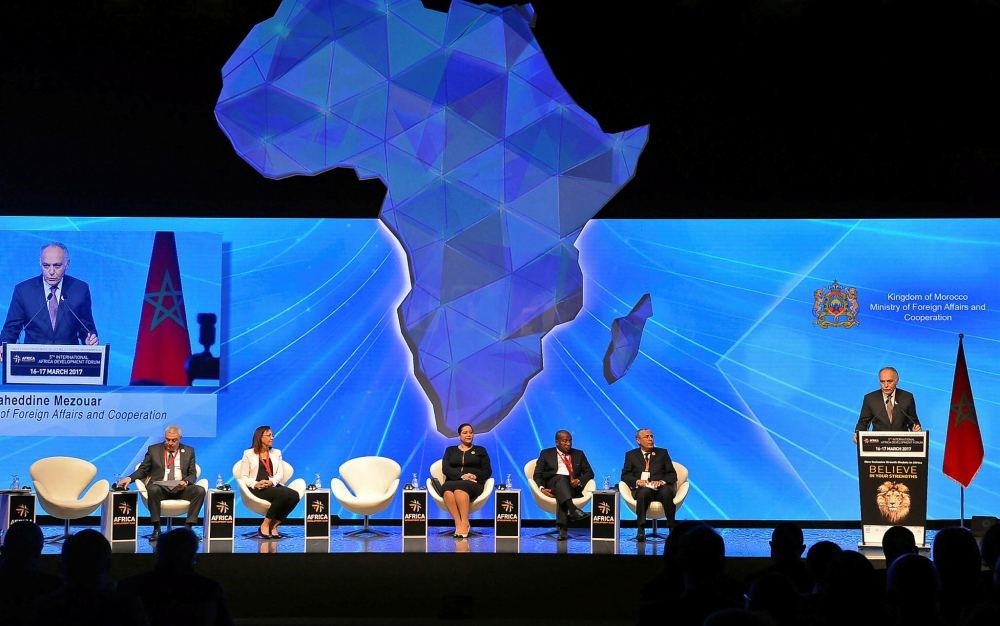 African countries, along with the Pacific Islands, are looking to improve ties and enhance cooperation while Morocco, which has recently rejoined the African Union, seems to be a leading country in terms of economic development, experts said at the five-day Crans Montana Forum

The Crans Montana Forum was held in Dakhla on March 16-21 with as many as 2,000 participants from 115 countries under the theme of "A New Africa in the 21st Century; Stability, Cohesion and Solidarity for Sustainable Development," and under the patronage of Moroccan King Mohammad VI. The five-day forum saw several speeches and presentations on different topics, including energy, migration, and the role of women in society, politics and south-south cooperation. A Swiss nongovernmental organization (NGO), the Crans Montana Forum was established in 1986 with the participation of several prominent politicians, including Yasser Arafat, Shimon Peres and Turgut Özal.

"The Crans Montana Forum works to build a more humane and impartial world and encourages international cooperation and overall growth. It also works to promote the best practices and to ensure a permanent dialogue between all those who handle high-level responsibilities. The first annual Crans Montana Forum, in 1990, was dedicated to political and economic reconstruction in a Europe that was open in the aftermath of the Cold War," the forum's statement read.

"The various forums organized worldwide [Brussels, Geneva, Rabat, Dakhla, Vienna, Crans-Montana, Bucharest, Baku, Zagreb, Rome, Sarajevo, Tirana, Athens, Malta, Bahrain] represent exceptional opportunities for businesses and government officials to implement their strategies, strengthen relationships with partners and create new ones, while building cooperation opportunities," it continued. "At a time when Morocco is making a triumphant return to the African Union, it is more than ever essential to give opportunities to major international decision-makers to discover a city and a region, become clear evidence that no fatality resists a visionary and development-oriented policy," said the honorary chairman and founder of Crans Montana Forum, Jean-Paul Carteron.

This year, the forum was held in Dakhla, a small Sahara town near the Atlantic Ocean. It was surprising to see the city to be very developed in terms of infrastructure. The locals said kite surfing attracts thousands of tourists and contributes to their economy considerably. Despite the so-called territorial dispute over West Sahara, the locals of the small city, where Africans, Arabs, Barbers, Europeans live together and Spanish, French and Arabic are widely spoken, were content with Morocco's ruling since the Moroccan government pays special attention to the development of tourism.

While several human rights' groups, including Amnesty International, accused Morocco of violating human rights in West Sahara, Mohammed Ahmed Gain, a lecturer at Ibno Tofail University in Kenitra, said the reports were biased and far from the truth. He said the West Saharan dispute was mainly because of colonial heritage. Reminding of the fact that a part of Morocco was colonized by Spain and the other part remained under French control, he said: "I call this situation 'tailored geography and tailored identity,'" meaning that the people of Morocco and West Sahara have been uprooted from their own culture. He said: "Those who claim to be carrying out a struggle for an independent West Sahara exclude the part about French colonization since they, mainly the POLISARIO Front, are a proxy of some international and regional powers." Regarding the question of the West Sahara not being recognized by the EU and the U.S. as part of Morocco, Carteron said: "If Morocco had not imposed its control over the region, it would have fallen into the hands of al-Qaeda and Daesh."

Obviously the dispute was not the Forum's focus. More than 10 panels were held, each focused on a different subject. While most of the speakers were ministers and politicians of different countries, including the EU and Africa, ordinary people, for instance a woman who lost her son during his migration attempt to Europe from Senegal, also were given the floor. Likewise, women have been prioritized to express the problems they face.

One of the main focuses of the Forum was south-south cooperation, indicating that African countries along with the Pacific Islands would improve their ties and enhance cooperation. Morocco, which has recently rejoined the African Union, seems to be a leading country in terms of economic development. One of the major issues was climate change since its effects are felt in African and Pacific countries although these countries have done nothing to cause the change. Suffering from the developed countries' reluctance to take necessary measures, despite the fact that the West was primarily responsible for the warming, politicians and representatives of the South said they have sought ways to tackle the consequences of the changes.

African politicians, underlining Morocco's success, said the cooperation had to be increased in the economic sector as well as cultural and educational areas. Gain said that "Morocco is an example of social and economic development as well as the protection of human rights. It is a win-win scenario for all Africans," he said, adding: "The forum provides an opportunity to enhance cooperation since Morocco wants to be more open to Africa."

Turkey's growing interest in the continent

Turkey was among the non-African countries to be mentioned in several panels, with appreciation shown towards Ankara's success in economic development, independent maneuverability and its strategies for tackling the refugee crisis. Nezaket Emine Atasoy, head of the Industrialist Businesswomen and Businessmen Confederation (SANKON), said Turkey's approach to Africa was highly appreciated. After thanking the Moroccan king for his invitation, she said: "The forum is very important for giving the opportunity for making business ties with Africa." Emphasizing the significance of the forum being held in an African country, she said: "Africa is a developing continent. Developed Asian and European countries should make more contributions. Any investment in Africa will create job opportunities and strengthen the position of women and youth in their societies." Explaining that Turkey has the potential to make investments in Africa, she said, "Construction, infrastructure and energy sectors are the main ones for investment. Moreover, farming is a growing sector and investments on this field may create an opportunity to turn African countries into exporters." She also added that African businessmen and politicians were very positive on Turkey's growing interest in the continent.

Gain also made a similar point, saying that Turkey with a rapidly developing economy will have many cooperation and investment opportunities. "We should look at Turkey's history. The Ottoman Empire has never been hostile to Africa. Turkey's experience in developing the economy can be a very good example and model for African countries," he said.
RELATED TOPICS