Somalia: A bitter journey of hope for sick children 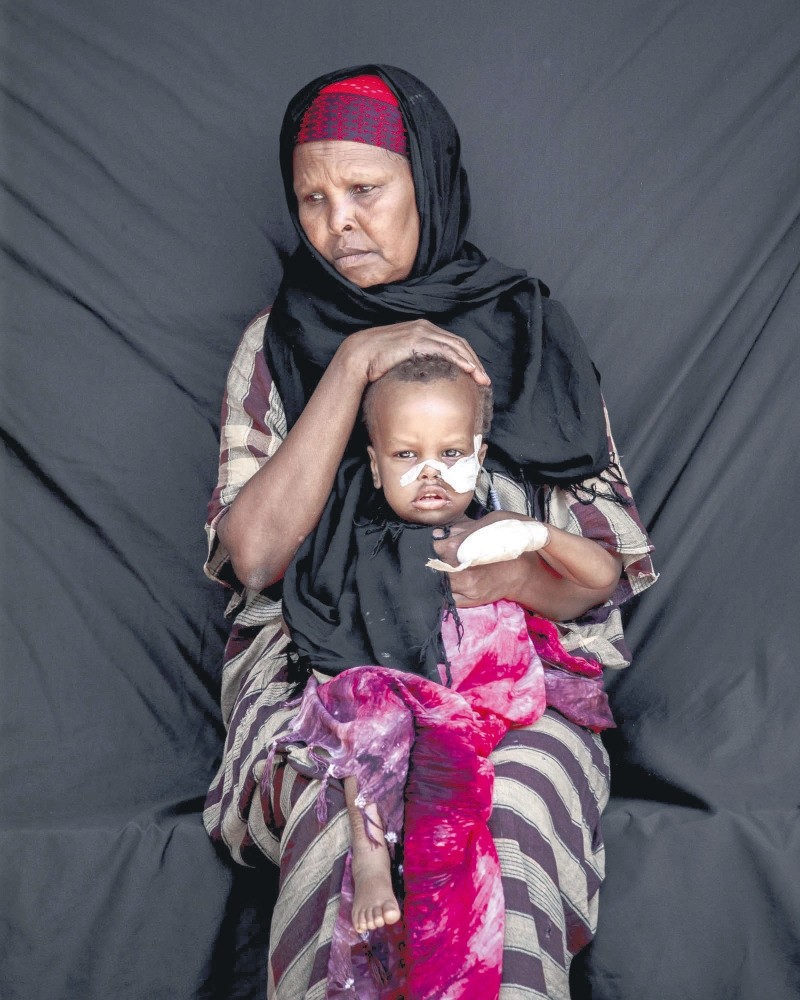 Faduma Saad Abukar with her son Anas. The two traveled to the hospital from their village hit by drought-related diseases.
by Daily Sabah with AA Apr 03, 2017 12:00 am
With a resigned look on her face, Faduma Saad Abukar, clings to her son Anas Mohamed as the two wait for a doctor's appointment. Abukar, who hails from a distant village in Bay state, traveled to the only hospital in Baidoa, the nearest city to her village, to help her son. Mohamed is among 150 children who are among the most vulnerable to famine and epidemic diseases fueled by the unprecedented drought in Somalia.

Outside a ward for malnourished children, fathers and mothers line up, as the African country looks for international aid in the face of the drought, the latest disaster to hit a country already suffering from years of civil war and the current terror threat.

The government declared a national disaster after drought hit 11 regions, including Bay and Bakol, where at least 110 people died of hunger and waterborne diseases in a 48-hour span of time in March.

The country witnessed famine just a few years ago and Somalis now fear a repeat of 2011, when at least 260,000 people lost their lives. The drought poses a grave threat to 3 million people, according to U.N. figures. International aid organizations have been mobilized to help Somalis but the efforts remain underfunded. Facing a humanitarian crisis, thousands try to flee to regions not affected by drought or neighboring countries but the displacement also poses a risk as experts say a cholera epidemic is prevalent among women and children in the overcrowded, unsanitary refugee camps and due to lack of water.

Speaking to reporters at a Baidoa hospital, Steven Lauwerier, UNICEF's representative for Somalia, said more aid "is very important if we want to prevent the cholera epidemic from going out of control and also to prevent famine. We have to get the funding now to prevent it."

"We are still ahead of the curve of the famine because now is when we can save lives," Lauwerier went on to say. "This is not the time to have doubts that funding is not needed."

The International Committee of the Red Cross warned recently that the international community had four months at most to save millions of people in Somalia from starvation. Dominik Stillhart, a senior official from the Red Cross, said prolonged conflicts and natural disasters, including drought in the Horn of Africa, had worsened the situation on the ground. From Yemen to Somalia, more than 20 million people are facing famine.

Turkey is among the donors supplying food to Somalia and 380 tons of food aid supplied by the Turkish Cooperation and Coordination Agency (TİKA) and Disaster and Emergency Management Authority (AFAD) of Turkey were delivered to drought-hit regions on Sunday.

The food aid will benefit 12,000 families in Baidoa, Galkayo, Mogadishu, Kismayo and Laascaanood, and Turkey plans to send a ship loaded with 11,000 tons of food aid to the country next month. Turkey is also at the forefront of a social media campaign. The campaign by social media sensation Jerome Jarre had called Turkish Airlines to fill a plane with humanitarian aid and it managed to raise more than $2 million last month from donors all across the world. Anadolu Agency reported that Turkish Airlines will fly 60 tons of humanitarian aid to Somalia as part of the campaign that spread on social media with the hashtag #TurkishAirlinesHelpSomalia.
RELATED TOPICS