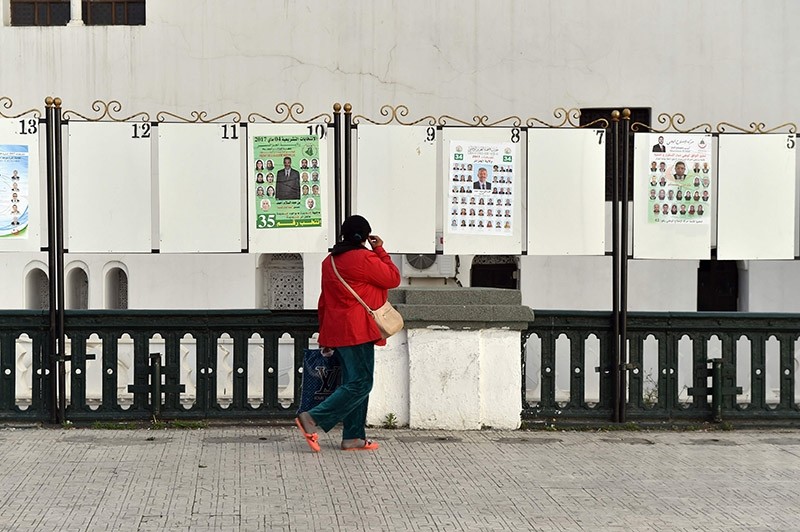 An Algerian woman looks at electorial campaign posters for the upcoming legislative elections in Algiers' Martyrs Square as the official start of campaigning got underway on April 9, 2017. (AFP Photo)
by Anadolu Agency Apr 21, 2017 12:00 am

An opposition party in Algeria this week unveiled a parliamentary electoral list composed entirely of women.

The first of its kind in the country's history, the all-female list -- led by lawyer Khaduja Buska -- includes candidates with backgrounds in law, medicine and public administration.

The list was drawn up by the Algerian National Front, a "centrist" opposition party led by former presidential candidate Moussa Touati.

"The all-female list does not mean that male candidates are excluded," Touati told Anadolu Agency.

"But women happen to be the most active in the party's local structure in the province," he said.

While it is illegal to form a party list that excludes women, he explained, "there is no law against the establishment of an all-female list".

Buska, for her part, a 38-year-old lawyer who has been active in the party since 2008, said candidates had been selected "according to strict standards".

"All the women on the list are academics, managers or public administration experts," she said in an interview with Algeria's Al-Watan newspaper.

She went on to describe the women's list as a "new and surprising development in Algeria, where electoral lists -- both for parliament and local councils -- tend to be dominated by men".

According to the Algerian authorities, only 31 percent of candidates registered for the upcoming polls -- slated for May 4 -- are women.