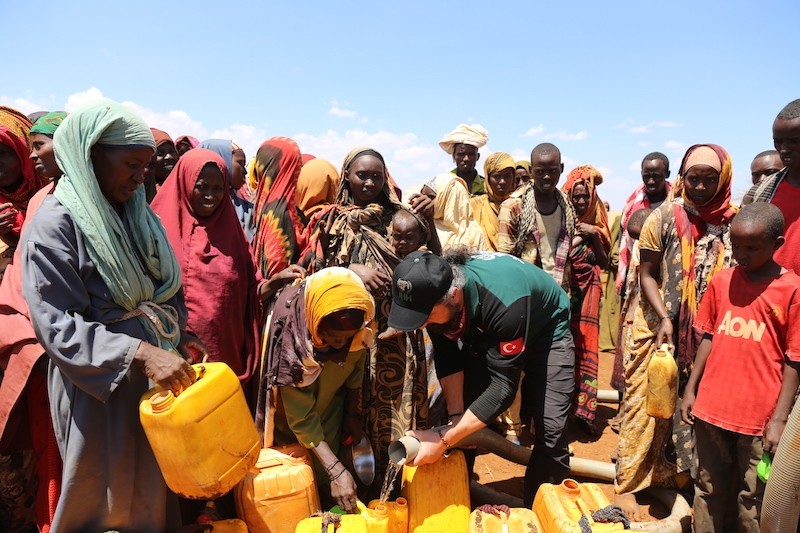 Turkish aid is becoming the lifeline for people in Somalia, with aid organizations like the Turkish Red Crescent, the IHH Humanitarian Relief Foundation and the Turkey Diyanet Foundation (TDV) reaching out to those suffering from the consequences of civil war and a severe drought.

Turkish humanitarian relief organizations have undertaken important steps to counter the effects of the drought in Somalia and the ensuing famine, which is believed to have affected as many as six million out of the total population of 12 million.

Since 2011, the Turkish Red Crescent has been operating in the region and distributing humanitarian assistance by sea and air. The organization also established a refugee camp for 30,000 displaced people in addition to founding mobile bakeries and kitchens. Last March alone, it supplied one ton of baby food and kitchen supplies to the region.

The Turkish Red Crescent, which cooperates with the Red Crescent Society of Qatar, also aims to implement infrastructural and environmental works in the region. Additionally, it has invested in the establishment of educational facilities. Financial resources that the Turkish Red Crescent has transferred to Somalia amount to 180 million Turkish lira (approximately $50 million).

The Turkey Diyanet Foundation (TDV), a religious organization under the roof of Turkey's Presidency of Religious Affairs (DİB, better known as Diyanet), began to hand out food aid to 18,000 families situated in South Sudan, as well as Kenya and Ethiopia, which have also been affected by the drought. TDV also opened three large wells in Somalia and plans to drill further wells in the Banadir, Galmudug and Awdal regions with a capacity of 10 tons of water each, which will the secure drinking water supply for approximately 20-25 years.

The IHH, with the help of philanthropists, distributes food and water aid to Somalians and aims to conduct infrastructural works to solve water supply issues on a more permanent basis. It has also prepared a report called "Project of Immediate Aid for East Africa," which analyzes the current situation in the country in regards to the human toll and migration.

Somalia has been suffering from drought since 2011, in addition to decades of civil war and the breakdown of the central government.