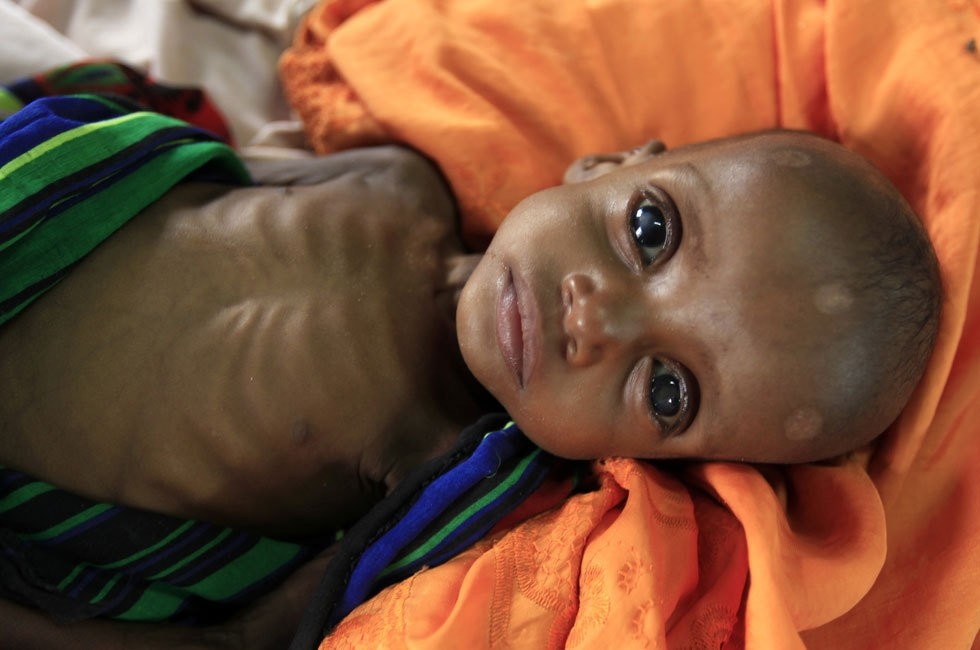 An unidentified severely malnourished Somali refugee child rests inside a ward at the Medecins Sans Frontieres (MSF) hospital at the Dagahale refugee camp in Dadaab, near the Kenya-Somalia border, July 28, 2011. (REUTERS Photo)
by Daily Sabah with Agencies May 02, 2017 12:00 am

About 1.4 million Somali children could suffer from severe malnutrition, with 275,000 of them being under the acute threat of starvation, the U.N. Children's Fund (UNICEF) said on Tuesday. The U.N. is now calling for further funding in order to advert the crisis.

They include more than 275,000 children potentially facing a life-threatening severe acute form of malnutrition, who are nine times more likely to die of diseases including cholera or measles, UNICEF spokeswoman Marixie Mercado said.

The figures are offered by a projection for the current year of 2017, which exceed prior estimates from January 2017 by 50 percent. The situation is worsened by the fact that malnourished children are under a higher risk -9 times more likely- of contracting contagious diseases like cholera or measles, UNICEF spokeswoman Marixie Mercado explained.

"A severely malnourished and dehydrated child can die in a matter of hours if they do not get treatment for diarrhea or cholera. Measles, which can be transmitted via air, can spread like fire in congested displacement camps," she told Reuters.

UNICEF has reportedly treated 56,000 Somali children with severe malnutrition since the start of the year, and the U.N. is now seeking funds for assisting more Somalian youngsters affected by drought and displacements due to military unrest.

The agency, which supports nutrition and cholera centers, had no figure for the overall number of children who have died so far of hunger and disease in Somalia. But Mercado noted that in the 2011 famine an estimated 258,000 people died over an 18-month period, including 133,000 young children.

"Every mother I spoke to said their children were sick, either with diarrhea, or vomiting or feverish. Most had never been vaccinated before because of the insecurity across the country," Mercado said. "The pace and the scale of displacement have risen exponentially."

Although the U.N. has received almost 60 percent of its humanitarian appeal of $720 million for Somalia for 2017, U.N. spokesman Jens Laerke warns the international community with the words "We are still in a race against time."

Laerke added that some 615,000 Somalis have fled their homes due to drought and failed crops since last November, joining 1 million previously internally displaced.

Somalia has suffered the consequences of civil war since the 1990's, and the humanitarian situation in the country, which currently lacks an undisputed central government, took a turn for the worse when the country was hit by the El Niño phenomenon in 2011, causing widespread and severe droughts. Children are not only affected by the dearth of food, but also suffer from a lack of education, growing up in refugee camps without the opportunity to attend school.

An estimated 2.9 million people in Somalia are facing famine, along with 17 million in northeast Nigeria, South Sudan and Yemen, the United Nations says. Famine has already been declared in pockets of South Sudan.