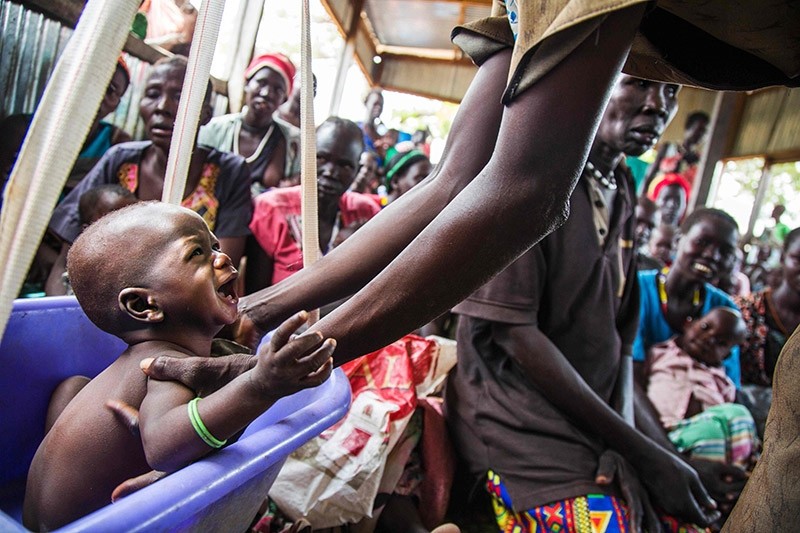 A mother weights her malnourished child on May 31, 2017, in a nutrition centre run by the International Rescue Committee (IRC) in Panthau, Northern Bahr al Ghazal, South Sudan. (AFP Photo)
by Associated Press Jun 02, 2017 12:00 am

The United Nations said the children died of "severe sepsis/toxicity" from the contaminated vaccine, and the health ministry blamed the deaths on human error. One syringe was used for all the children during the four-day campaign, and the vaccine was stored without refrigeration the entire time.

Measles is yet another challenge facing the desperately poor East African country that already has been devastated by more than three years of civil war and a recently declared famine, as well as a cholera outbreak.

The government said all of the children who died were under the age of 5. It is setting up a commission to determine who is responsible and whether victims' families will be compensated.

The measles vaccination campaign is targeting more than 2 million children across the country. About 300 children were targeted in the area where the children's deaths occurred.

The children died in the rural town of Kapoeta in early May. Another 32 children suffered fever, vomiting and diarrhea but recovered, a joint statement by the World Health Organization and the U.N. children's agency UNICEF said.

Abdulmumini Usman, the South Sudan country director for the World Health Organization, told The Associated Press earlier this week that even after the organization became aware of the deaths, the measles campaign continued across the country except in Kapoeta.

"This campaign is lifesaving," Usman said.

WHO provides some training to South Sudan's health officials and the U.N. children's agency provides the vaccines to the government. It was not immediately clear whether any U.N. officials were present at the time of the botched vaccinations.

The joint statement by WHO and UNICEF said the vaccination team involved in the deaths was "neither qualified nor trained." It called the deaths a "tragic event."

Dr. Samson Baba, an immunization official in the ministry of health, refused to comment on the deaths earlier this week, instead demanding the source of the information.

South Sudan's government on Friday also said vaccinations are not being denied to any part of the country, including those held by opposition forces.

The civil war has killed tens of thousands and sent more than 1.8 million people fleeing the country, creating the world's fastest-growing refugee crisis.