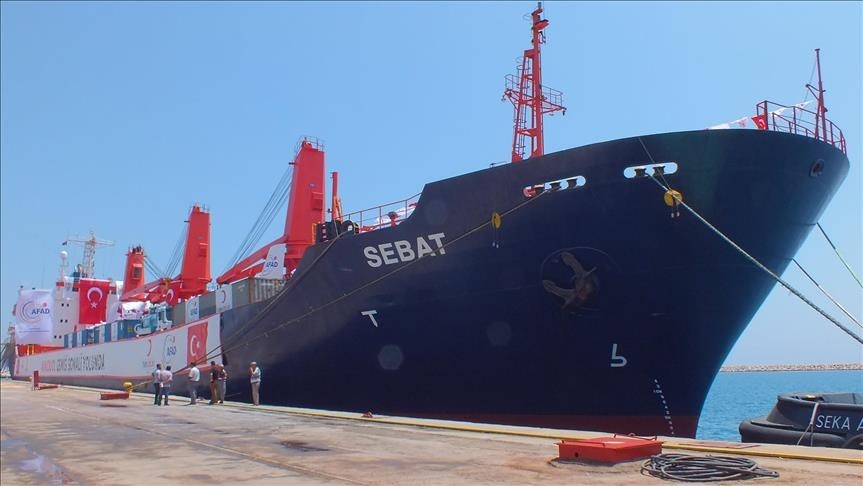 A ship carrying 15,000 tons humanitarian aid, including food, set off to Somalia yesterday from Turkey's southern Mersin province to deliver aid to the country. Organized by the Turkish Red Crescent, the Disaster and Emergency Management Authority (AFAD) and the Turkish Cooperation and Coordination Agency (TİKA), the ship embarked following a ceremony marking the event attended by Development Minister Lütfi Elvan and Mersin Mayor Burhanettin Kocamaz. Ankara places great emphasis on developing long-term projects for famine-stricken poor countries such as Somalia. The Turkish Red Crescent has been backing the Mogadishu Municipality in carrying out its services.

Also, the Turkish non-governmental organization is developing several projects including garbage collection, road construction, waste water reclamation and debri removal, for the rehabilitation of the people of Somalia and reconstruction of the cities.

Also recently for Ramadan, the NGOs delivered kitchen supply sets and food to 576 families in the Kaxda region of the Somali capital city of Mogadishu.

Meanwhile, the Somalian-Turkish Research Hospital opened in 2015 by President Recep Tayyip Erdoğan in Mogadishu is another example of how the Turkish people are helping Somalis through long-term, permanent projects.

The 230-bed hospital provides training for prospective Somalian healthcare personnel and was built to serve 2 million people living in Mogadishu and towns near the capital, offering services to a monthly average of 6,000 people and roughly 100 surgeries.